She was ten years old when she told her Mom and Dad that she wanted to join her friends and show horses in 4H.  Her family had three horses, two elderly horses and one younger 'trail horse', a Morgan/Arabian Gelding named Charlie, fairly new, purchased to fill the void when one of the older horses passed on. 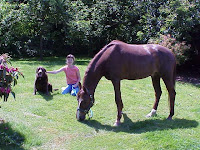 Her parents knew that the older horses wouldn't be able to stand the stress of 4H.  They suggested the Daughter use Charlie as her 4H horse.

After a year of lessons, the family decided to let Charlie live at the barn where the Daughter could come and ride him whenever she wanted.  The Mom and Dad were always happy to drive the Daughter out to ride or take her to lessons.  They loved to watch the Daughter ride. 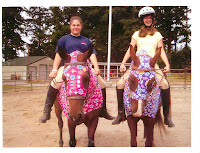 The Daughter made many friends at the barn and in the summer they would all pack water bottles and their lunches and spend their days at the barn playing with their horses.  All of the Mom's would take turns carpooling them to the barn and back.  Infact the Daughter (on the right) even learned how to sew things for Charlie.

A few months after Charlie settled down at the barn, it was time for 4H horse shows.  The family had lots of fun taking the Daughter and Charlie to shows in their used 1970-vintage Miley trailer.  The family purchased a camper and the Dad and the Daughter would go to the shows the night before and camp out.  It was some of their favorite times.  The Mom would join them the next morning, bringing them breakfast from McDonald's. 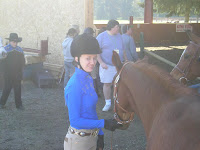 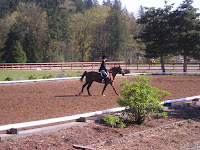 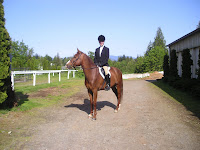 Soon it was time for the County Fair, the finals for 4H and where the State Fair competitors would be chosen.  Charlie had never been to a fair.  He had a hard time with the noise and excitement.  He tried to be brave but sometimes it was too much for him and he got very scared.  Charlie and the Daughter returned from County Fair with lots of experience but did not get chosen to go to State Fair.  The Daughter said, "It's ok, Charlie and I will do better next year."

And indeed they worked very hard the entire next year, taking lessons, going to all the schooling shows and attending all of the 4H shows!  Early that summer the Daughter mentioned she'd like to jump.  The Mom told the Daughter that she should never jump Charlie without an adult around.  A few weeks later, the Mom found this picture in the Daughter's room:

Soon the next year was upon them and it was time again for the County Fair.  Charlie was now used to the noise and bustle but sadly once again the Daughter and Charlie didn't make it to State Fair.

When the Mom picked the Daughter up at the barn after the County Fair, the Daughter sobbed, telling her Mom how hard she and Charlie had worked and how much she had wanted them to be chosen for State Fair.  Life hit hard for a twelve year old and it about broke the Mom's heart.

The Daughter's legs were now hanging down below Charlie's stomach.  The Mom and Dad talked to the Daughter about finding a larger horse.  The Daughter agreed but she was hesitant to leave her beloved friend, Charlie.

The Mom and Dad took the Daughter to see a horse.  He was a Paint and his name was Want My Autograph (Champ).  He had the talents to become a show horse.  The Daughter rode him and shortly therafter the Paint was purchased.

Charlie went home where he enjoyed being the boss of everything in sight.  But the family knew that Charlie needed a new home where he could make someone else as happy as he had made the Daughter.  He was sold to a family who had a little girl who used him as a trail horse.  The Mom checked on Charlie after he was sold to find that the new family loved him and that Charlie was much happier being a trail horse then he'd been as a show horse.

The Daughter worked hard with Champ, just as she had with Charlie.  They participated in some APHA shows and even went to Canada. 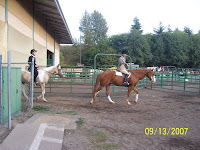 But the Daughter missed her friends in 4H.  In her Junior year of high school, seven years after she'd told the Mom and the Dad that she wanted to ride horses, she returned to 4H.  She rode Champ at County Fair and this time she made it to State Fair!
But it didn't seem to hold the same meaning as it did when she was ten years old.  The Daughter was growing up.  After the State Fair she quit riding to concentrate on getting ready for College and the life of "growing up".

One day, the Mom and the Daughter were driving in the car when the Kenny Chesney song, "Who'd You Be Today", came on the radio.  The Daughter told the Mom that the song made her think about Charlie and she talked to the Mom about how much she still missed him.

The Mom contacted the family who owned Charlie, asking them if they'd consider selling him back but they declined.  In some way the Mom had thought if she could bring Charlie back that her little girl would also come back.

The Daughter graduated from High School with Honors and headed off to College.  She became a lovely, intelligent women, with a special quality for compassion and seeing both sides of a situation.  The Mom and Dad are proud of the Daughter and believe that the family's time together with horses contributed to how special she has become.