Ladies Night #5 was held at Fiddleback Ranch instead of the barn where we've been meeting in the past.  Our new location, nestled up in the woods of the Cascade Foothills, required hauling the Ladies Night horses over to the ranch.  Those who have their own "rigs" filled their trailers with those who don't so we could get everybody there. 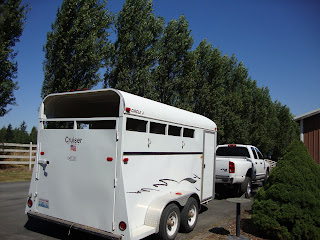 Arriving at Fiddleback I found myself parked alone on the upper circular driveway of the ranch due to the length of my rig while everybody else parked on the lower road.  Parking up there made it easy when I leave because I only need to drive forward to get out onto the road vs trying to back up.  Trust me, backing up this 4-door pickup and 3-horse slant isn't much fun.
This Ladies Night would be focused on trail course obstacles.  The owners of Fiddleback are active in the American Competitive Trail Horse Association (ACTHA).  They had generously set up a trail course which they use for practice.  On this night we'd be exposing our horses to all sorts of different obstacles.  Tonight would challenge the trust between horse and rider, at times to its extreme limit. 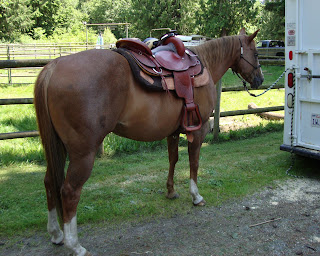 As usual unloading Bob and getting him ready went fine until....There was the most horrible sound that came out of the woods behind us.  It was like a terrible scream and was immediately followed by what I recognized as Coyotes howling in the brush, surely not more than just feet from us.
We have Coyotes here at home and they've never harmed the horses; however, their proximity had me concerned.  And that prior sound...it was just awful.  It raised the hairs on the back my neck and gave me goosebumps.
I looked wide-eyed at Bob and he looked wide-eyed back at me.  I still chuckle at how we immediately looked at each other.  Bob was checking in with me to see if it was ok and I was looking at him in fright.  So much for being the leader of this team, I was just as scared as Bob!  My fright confirmed to Bob that something was wrong.  He became agitated at the trailer.
I hurried to get us ready and down to the lower driveway where everybody else was gathering.  Tonight I was about to expose Bob to all sorts of unknown obstacles.  I had planned to have our evening start out in an assured atmosphere.  So much for that.

On our way down to join our Ladies Night buddies, Bob spooked at various things he encountered along the way.  The coiled hose was a snake; the big rock was a monster, etc.  I calmly hand walked him around the snakes and monsters until he accepted them and settled down.
Brave Heart
The Ladies broke into two teams.  We would hand walk our horses through the unique trail obstacles to begin with.  My team returned to the upper road.  Bob didn't think that was such a great idea but back we went.
Being in the comfort of others, I felt assured.  I tried my best to exhibit how I felt to Bob.  In the outdoor arena we walked across a wooden bridge and over logs.  Bob had settled down and did fine on those obstacles.
Brave Heart
The last obstacle was a curtain of swimming pool styrofoam noodles which we must walk through.  Bob didn't like the noodles bumping against him as he passed through.  He initially balked and then snorted and rushed through the noodles.
Not so Brave Heart
Each time we passed through I praised him and then turned him around and took him through the curtain again.  We did this multiple times and eventually Bob figured out that it wasn't going to hurt him.


Brave Heart
I grabbed a single noodle and rubbed it all over him.  Bob's eyes got big and his skin twitched but he stood still.  Eventually his eyes quieted and his body relaxed.  I heard the sound I love about Bob, that a big slobbering sigh.

Brave Heart
Changing places with the other team, we now went into the covered arena and exposed our horses to additional challenges.  We came upon a child's pup tent with dried branches in it that rattled.  Bob was curious and lowered his head to smell it and then picked up the tent in his mouth and shook it.  Silly horse!
A large blue tarp on the ground with poles on top was a concern for many of the horses.  Bob calmly walked back and forth over it, carefully stepping over the poles.  He acted as if the tarp wasn't even there.
A passage way that consisted of two walls of tarps was met as if Bob was walking into a stall.  No concern.
The big bouncy ball was rolled in front of Bob.  He was curious about the ball and assumed his cow stance behind it, trying to herd it.  I was concerned he might nip at it but thankfully he didn't.
A huge multi-colored umbrella awaited us.  After letting Bob smell it I opened and closed it and then held it over our heads as if it was raining.  Bob cocked his back leg and let out another slobbering sigh.
Brave Heart
We mounted our horses and meandered around the arena, now approaching the obstacles on horseback.  Suddenly that awful screaming sound came out of the woods again followed by more Coyote howls.
Many of us looked up when we heard that awful sound.  That's when one (savvy) Ladies Night rider calmly remarked, "Mules".  Again the sound came down out of the woods, now followed by hee-haws and then howling.
I calmly remarked, "Coyotes".
There were mules pastured back behind the woods.  As for the Coyotes, they were indeed in the brush, howling back at the mules.  What was so scary earlier to me was now comical and made me grin.  I had to wonder if that's how Bob felt about those noodles.  I wondered if horses can laugh at themselves.  I'm thinking so.
Dusk was quickly falling as we loaded up our horses and headed home.  As I drove home the sky was black with just a tiny speck of bright red on the horizon of the Olympic Mountain range.  A big old full moon was coming up over Mount Rainier and the Cascade Mountains.  It saddened me to know that fall was just around the corner and we only had two more Ladies Nights left.
I've learned so much!  This night had taught me how important it is to be the leader of you and your horse.  And even if I was afraid I was pleased to see how Bob had turned to me for leadership.  Lastly I was pleased to find he's the kind of horse who checks something out and once confirmed its ok, accepts it and moves on.  That's the kind of horse I had hoped he'd be and I couldn't be more pleased to call him mine.
Brave Heart
Posted by 50+ Horses at 3:24 PM