Warning, the pictures I'm about to Post below may be disturbing to some.

It was a gorgeous fall Saturday morning at the cabin.  C and I were just getting up.  J was coming up this AM to join us after he fed the horses.

Wrapping a towel around me I went into the kitchen to see what was up.  Our cabin has a tin roof and we are at the foot of a mountain.  As a result we don't get good phone reception inside.  The best place to get reception is in the (very back) of our back yard.

I found multiple text messages and phone calls had arrived - all from J.  I could tell he was frantic - "Call ASAP, Bob has been injured". 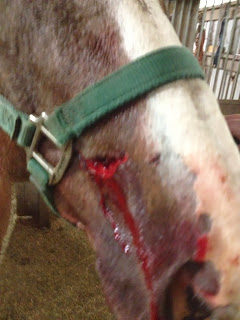 So there I am in a bath towel and no phone reception without stepping out into the back yard...where my neighbor was next door raking leaves.

Throwing on some clothes, I grabbed a pen/note pad and headed to my car, which has built in Bluetooth. I drove a distance to get good phone reception and dialed my husband.  He told me he'd come out to feed the horses and found them at the far end of our 3-acre pasture.  They had come running when he called.  Bob had arrived in the above condition.  J had tried to compress the cut and temporarily stopped the bleeding.  I asked him to text me another picture. 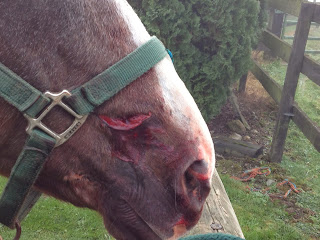 I had sure hoped it was a cut that would heal on its own but this second picture told me the Vet was going to need to get involved.  I placed the call and texted the above pictures.  Luckily she had just finished an emergency call near our house and was able to head straight over.  I called J and told him to hang tight.

It was hard to not pack up and dash home but I knew by the time I arrived all would be dealt with and I knew J had it under control.  So I returned to the cabin and waited.  About an hour later I got this picture: 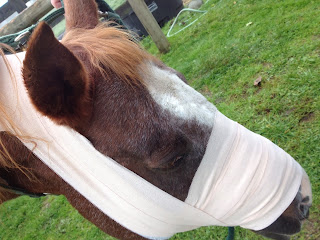 Poor Bob!  The cut was about 3/4" deep and had severed some blood vessels.  They had to sedate him to stitch him up.

I knew we were in for a rough ride - Bob has never been a good patient.  We were left with the typical antibiotic horse pills, 13 pills to be given twice a day for ten days.  The Vet had left J with directions how to orally inject the dissolved pills into Bob's mouth along with Bute paste twice a day.

Ugh....I can barely worm this horse.  J called Saturday night to report he had more meds on him than in Bob.  That and the fact that Bob's halter sits right on his stitches had me up and on my way home the next morning to assist.

Sunday had both of us covered with meds and a very unhappy Bob.  I decided to make one last try to medicate him before calling the Vet for injections, which after my Adequan experience with Bob last year wouldn't be much of a success either. 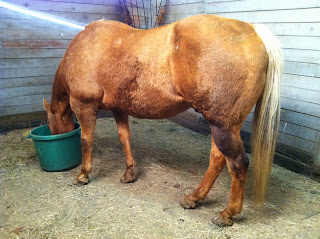 Peeb who has lost most of his teeth receives orchard pellets and senior feed in a broth each day. We refer to this meal as "Slop" which is exactly what it sounds like while Peeb gobbles it up. 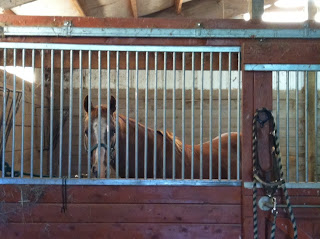 While Peeb enjoys his meal Bob (who is overweight) goes without and patiently stands tied watching his buddy enjoying his "special" meal.

On this day I made up two sets of Slop, adding meds and molasses to Bob's bucket.  After Peeb had received his "slop", I brought Bob's to him, making a big deal over how good it looked.

Success!  Bob put his head down to eat and never raised it once until his bucket was licked clean. The sounds of both horses "slopping" up their feed had both J and I grinning.  They sounded just like pigs. And that's how it was until Bob finished his meds. 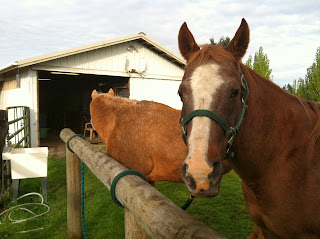 Last Friday the Vet returned to remove Bob's stitches.   Bob will have another scar to add to those already on the left side his face from before I purchased him.  But on the bright side - we've figured out a way to medicate Bob should it be needed in the future.