The first day of 2011 dawned as the last other six have - clear and cold with temps in the low teens.

We've had this weird snow since Monday night when we had an even weirder thunder and lightning storm.  People around here are referring to the snow as "dipping dots".  I've never had dipping dots but hear it's some type of ice cream. 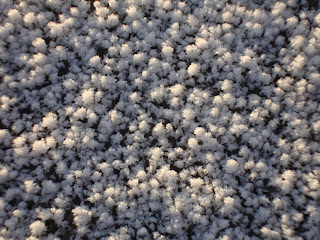 As the week has progressed the snow has melted where sun has hit but it's still present in shady areas.  The result is you can be on dry pavement one moment and on ice the next. 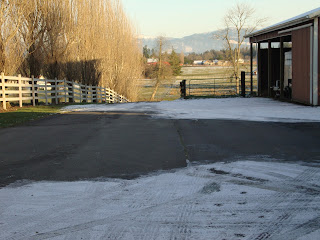 Today is was a good day to take down the outside Christmas lights.  Putting on my heavy jacket and what I refer to as my goom-bah hat, gloves and warm boots, I called for Hank our dog.  Off we went to get the little red wagon, used twenty years ago to pull a little girl who is now home from college and making a pie in my kitchen.

As we've done every year, we run our lights as far as we can along the now vacant Summer Pasture fence line which is in front of our house.  We use nails to run the lights along the top board of the fence.  So taking lights down today included pulling all the nails off of the fence.  I started to the left of our house: 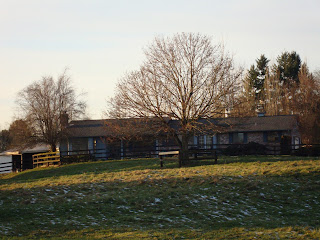 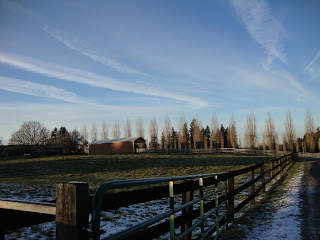 Initially the neighbor's buffalo that live on the other side of our drive (to the right of the above picture), came over to investigate what I was doing but soon got bored and wandered away.  They lost part of their tree in the huge windstorm we had a few weeks ago. 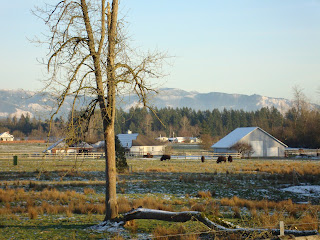 Our Belgian Draft Horses seem to like this weather.  Here's Bear, our elderly draft horse standing in the sunshine.  Gus is standing in the background underneath the trees, itching his back: 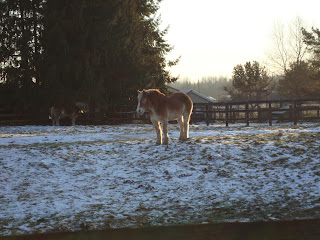 Someone recently asked me if I'd ever ridden the Belgians: 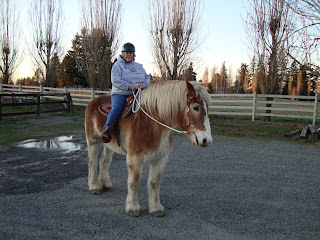 ﻿
I still smile at that ride.  Bear and I just kinda plodded along.  As long as I started turning us ten steps before we were supposed to turn, we did just fine!
I ended up today here inside my office in the barn where I now work part time since I retired a year ago...Today!  My window looks out at our paddock and sometimes when I'm working, I'll look up to see a Belgian staring at me. 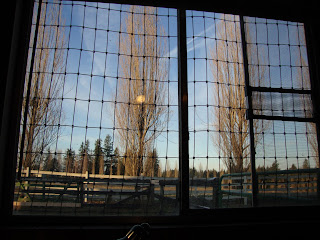 ﻿And of course, my best friend was by my side.  Here he is popping his head out from under my desk.  Note the heater on the right.  He parks himself next to it and is now sound asleep on my feet under the desk.  We're once again in the 20's outside and its only 5:36 PM. 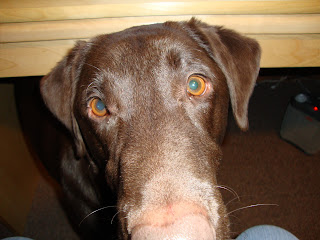