Belly Up To The...Ice Machine 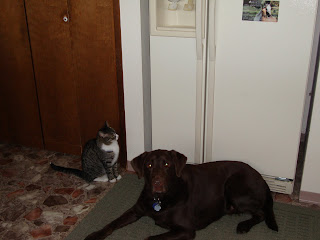 Tuna on the left and Hank on the right, waiting for a cube of ice from the dispenser in front of the fridge.

I thought I was being so nice by sharing a cube whenever I got ice.

It was so sweet how Hank would gently take it from my hand and as he ate it little pieces would fall on the floor.

It was so adorable how Tuna would take the chips and either eat or swat them around the kitchen until they melted into little drips of water, what was the harm in that?

They now expect a cube of ice anytime someone pushes the dispenser.  If they don't get their cherished cube, they camp out in front of the fridge and give anybody who passes that sad eye-pity me look.  And they will sit there for hours.

Yesterday morning I came out to the kitchen in socks and found the bottom of my feet were wet.  I was puzzled.  Was the fridge leaking?  Where was the water coming from?

Mr. 50+ is gone before I get up.  Apparently he had been hit up for ice and had generously given them each a cube.

At our house, if you want Hank and Tuna to come, you don't need to call them. 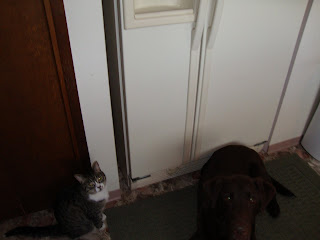