A New Horse Part 3, The Last Ride Before Pre-Purchase 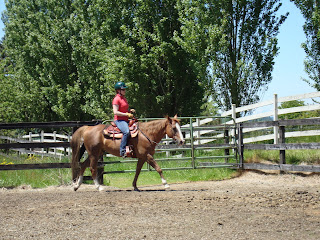 Yesterday Rachel, my Trainer/Friend (Frainer) and I put Bob through the remaining steps of what we wanted in my new horse.
Due to EHV-1, we've had to be creative with our challenges for Bob.  My agreement with his owner was that he wouldn't leave my home nor be exposed to other horses and I've kept my word.  But as a result, I couldn't haul Bob off on a trail ride, nor could I haul him to join my 'sorting friends'. 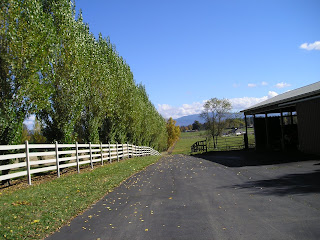 With the pre-purchase exam coming up, we decided to put Bob through some experiences that one might not find on a trail ride nor going to what I call, "walking amongst the cows".

With minimal ground work Rachel hopped up on Bob and we proceeded down my mile long gravel drive.  May not sound like much but riders from near and far avoid riding on my road.

As we headed out my gate we were met on the right by my neighbor's aggressive Stallion who wanted to show us how important and wild he (thinks he) is.

On the other side of the road we were met with another neighbor's dog, thankfully inside her fence.  She's a Cur and comes across as very aggressive.  In my morning walks I've found that with a few kind words and some dog biscuits she may seem aggressive but constantly wags her tail.  Regardless, glad she's on her own side of the fence and not mine!

After we passed the Stallion on our right, Bob was next met by a herd of Mares.  They charged up to the fence line at full speed multiple times while the Cur barked on the other side of the road.  Bob had enough.  He spooked forward a few steps before Rachel brought him back to a walk (I would have done the same thing too if I was Bob).

We proceeded down the road, leaving the Stallion/Mares behind on the right and eventually the Cur on the left.  Now on the left we were met with the challenge of another bunch of Mares and a Stallion.  But they are fenced away from the road and didn't seem to care much about our presence.  Bob ignored them and down we went to the end of the road where Rachel turned Bob around to return back from whence we'd come.

Although the Cur continued to bark, the Mares who had charged and the Stallion who had been so pompous seemed no longer interested and grazed quietly as we went by.  Bob ignored them all and seemed happy to be on a walk.

Back at the barn it was now my turn to take the ride.  Down we went again and this time is was a non-event.  I returned back to ride in the paddock, pleased with how Bob had responded.  I took an IOU to hand-walk Bob down the road with me on my daily walks in order to desensitize everybody.

That was the last ride before the pre-purchase exam.  What will the exam bring? 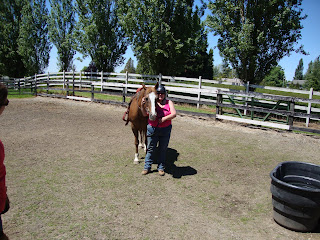