It's a sad time for me.  My good friend Haley, who I've ridden with at the barn for many years is about to put down her Soul Mate.

Haley and I found ourselves riding together in the indoor arena of the barn in late 2009.  Through various rides and conversations we found we had much in common.  Both of our pasts included lives as professionals - we had both been there and done that.

Although we ride different disciplines, we found our thoughts follow many of the same channels with each knowing instinctively what the other is thinking.  We've come to call each other Kindred Spirits. 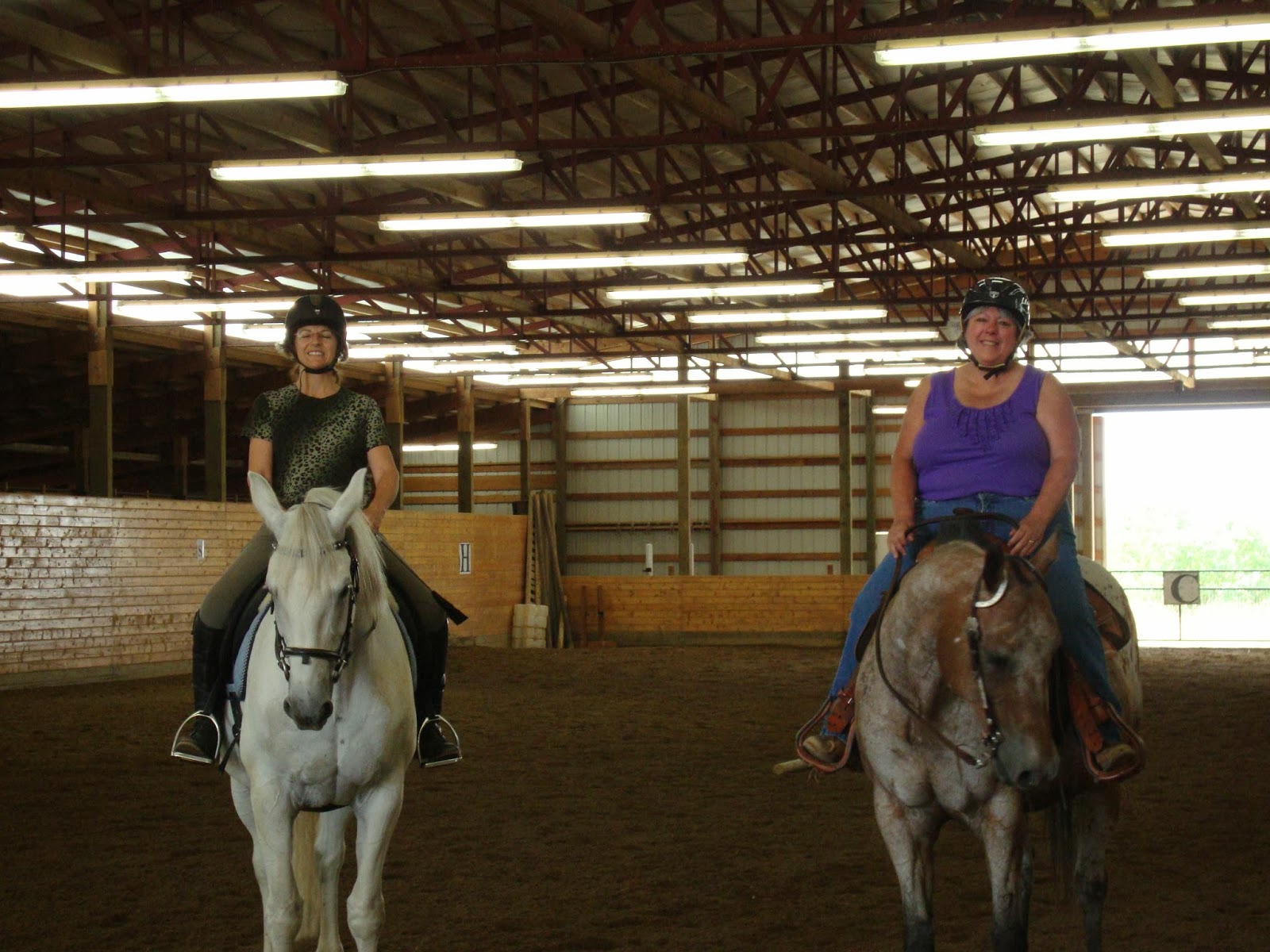 It's hard to believe that Haley and I have ridden together for over 5 years.  Here we are on a steaming hot August afternoon in 2010 after a great ride - just look at those smiles!  Haley is riding her Warmblood SVK and I'm on my Appy, Poco. 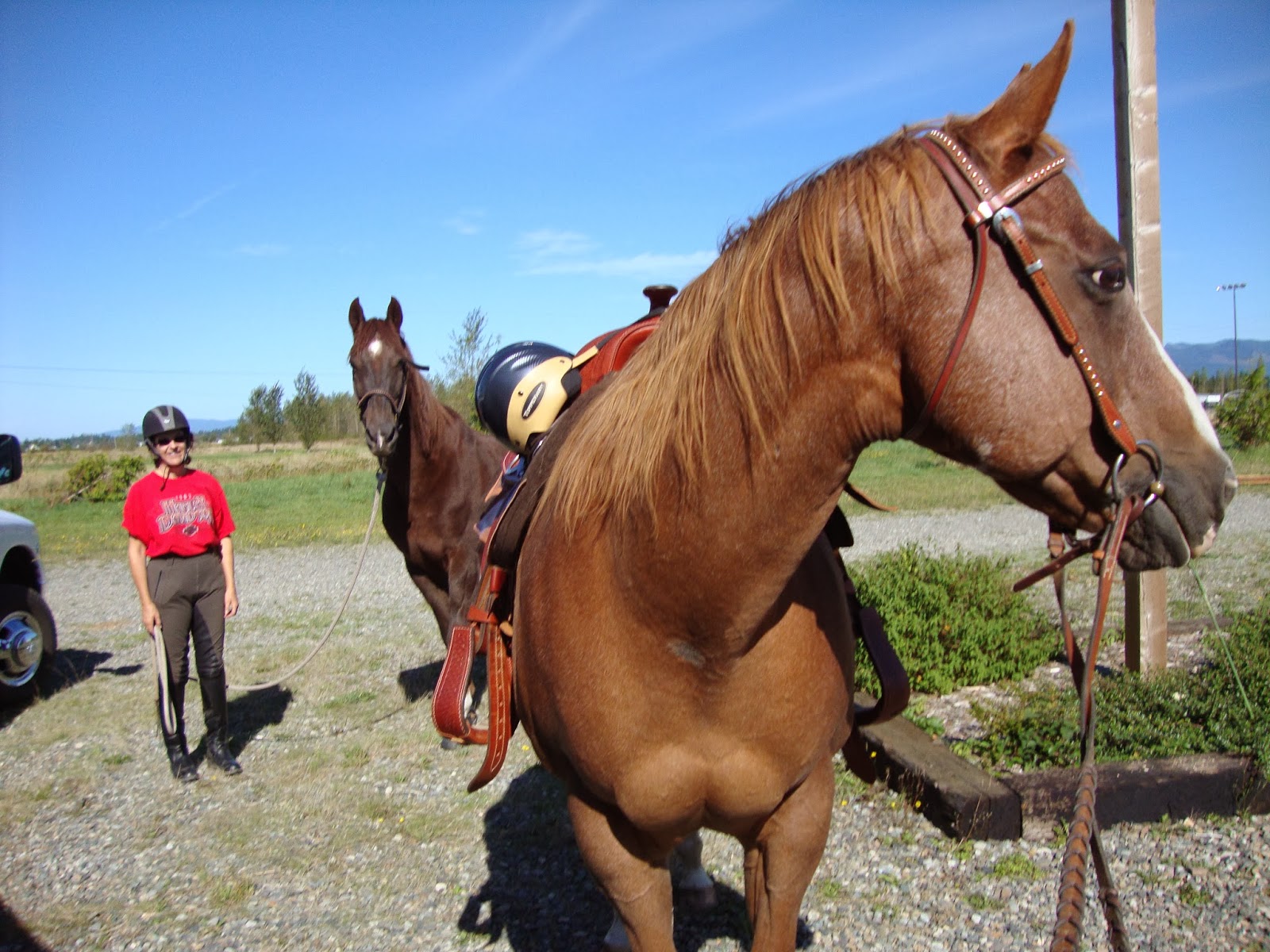 Fast forward to September 2011.  After the steaming hot summer of 2010, the winter of 2011 had been a long, rough one.  After many riding conversations where we'd frozen, we'd both agreed that fall was our favorite time to ride.  We came to call this season the "Blessed Days" (and still do).  On this particular day we had rushed to the barn to ride our horses before another cruel winter set in. Haley is pictured with her horse Harley and that's my horse Bob in the front.

Yes, Haley and I have been fortunate to have more than one horse.  And although we love them all, we've both only had one Soul Mate. 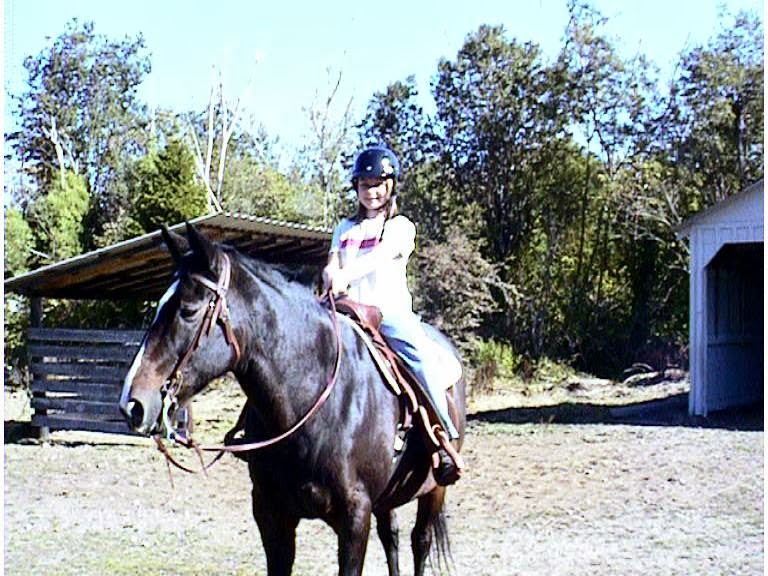 My Soul Mate was a horse called Barnie, pictured here with my Niece.  I love all the horses I've had and have but to date there has never been such a bond as I had with Barnie.  I rode him anywhere and everywhere without a shred of fear.  Just like Haley and I, Barnie and I both instinctively knew each other inside and out.  Hard to believe that it's been nine years almost to the day when I made the decision to put him down due to old age. 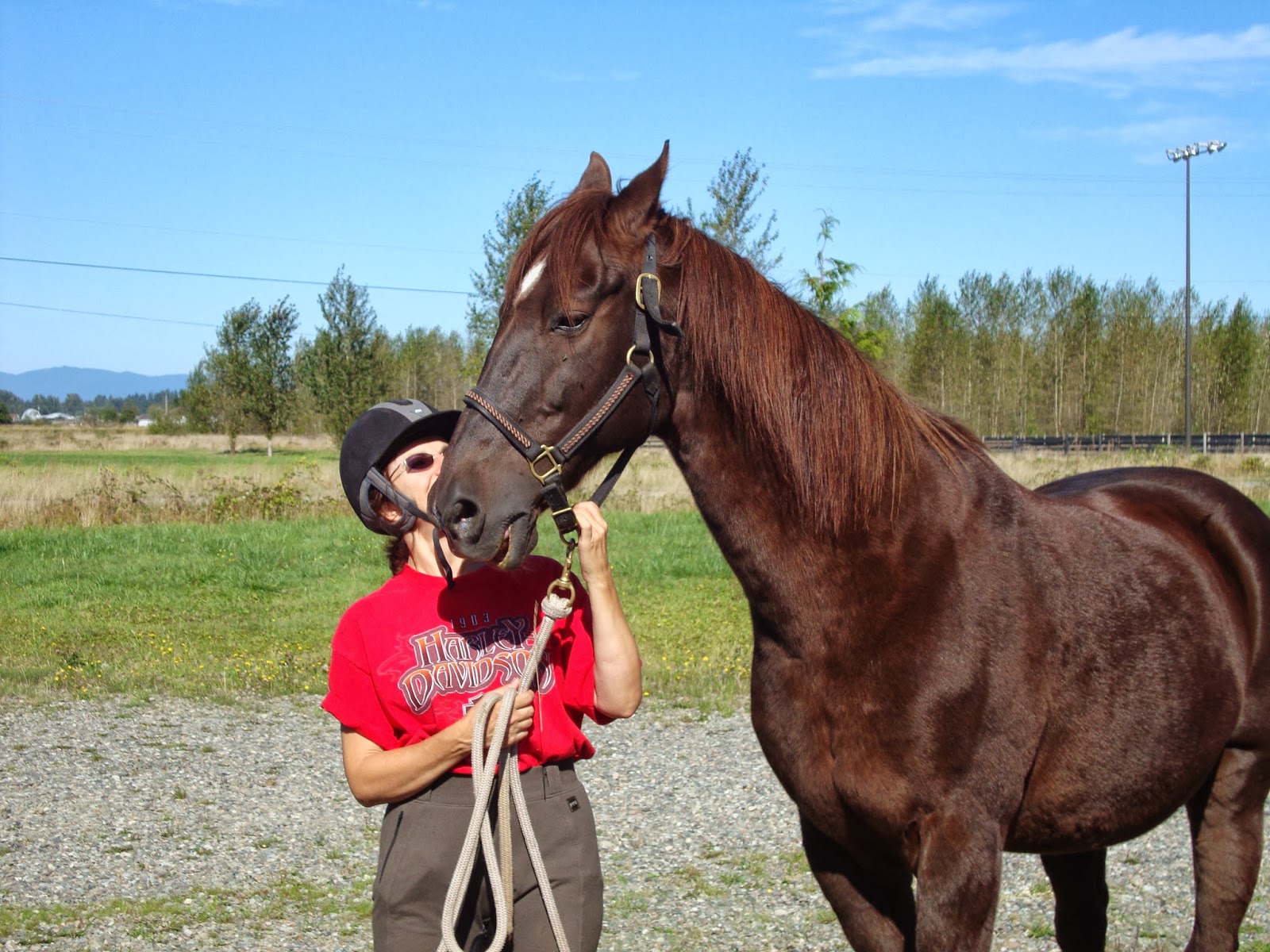 And just like me, Haley has also had other horses but only one Soul Mate - Harley.  Haley and Harley also have had that "thing" that is so rare.  It's been fun to watch them interact, knowing how special that relationship is.

Harley was diagnosed with Cushings about a year ago.  Haley has done anything and everything to make sure he's been well taken care of.  But about a month ago Harley became lame.  The bad news - Laminitis.

Since that time Haley has continued to do anything and everything to make sure Harley is comfortable.  The great efforts she's made have taxed her time at the barn and we've tried to catch up as best we could.

I saw Haley briefly on Monday.  We passed at the arena gate, she leading out SVK and I coming in on Elvis for a lesson.  We greeted each other...but there was something in her voice that caught at me (Kindred Spirits catch those type of things).  I didn't press it at the gate, sensitive to that pitch of her voice and not wanting to ask the unasked question.

Yesterday morning came a text message from Haley.  The battle for Harley was being lost and very soon he would be leaving.  My eyes filled with tears as a lump grew in my throat.  It's bad enough to have to put down one of your horses but to put down your Soul Mate?  Unexplainable.  A few words of condolence and support were about all I could muster on a return message and they all felt so wooden.

Visions of my Soul Mate returned yesterday.  Oh Barnie - all those great rides.  The places we went and things we did that I've never since done with any of my other horses!  How I loved you.

Late yesterday I sent a text back to Haley telling her she and Harley had been in my thoughts all day. I assured her that she was doing the right thing and that I knew how difficult it was to say goodbye to your Soul Mate because I had done the same thing.

I know what my Kindred Spirit is going through and I'm there for her.  Yet I will wait quietly until she tells me she needs me.  And like the Kindred Spirits we are, I know that when this is all said and done and I next see her that I will cry.  I will cry tears of joy for what she had and tears of sadnesss for what she's lost.

Harley...Barnie is waiting there to greet you. 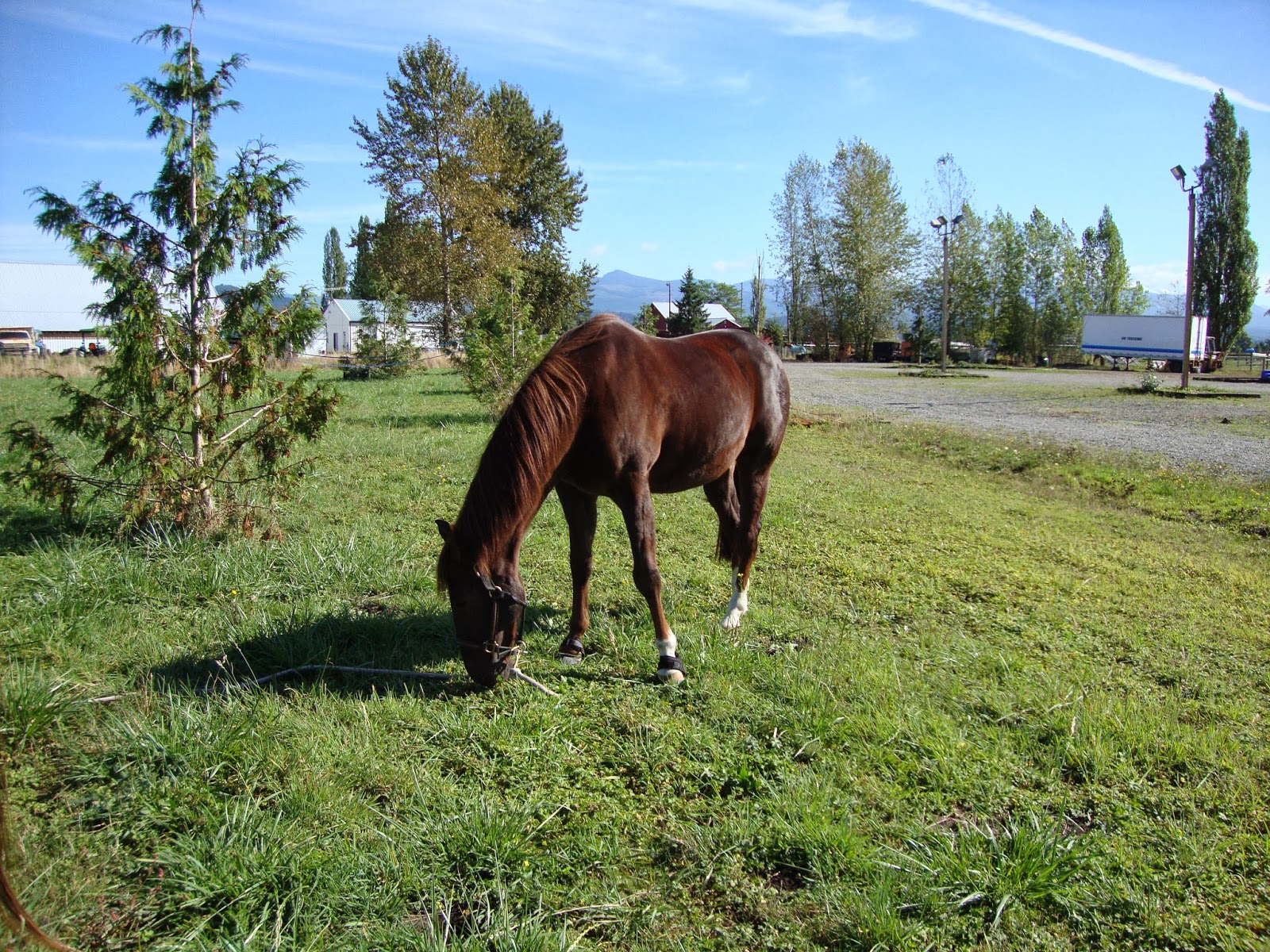