When I purchased my first horse we had an F-150 5-speed truck but no trailer.  We eventually purchased a used older Miley two-horse straight load.  My husband drove and loaded our horse into the trailer.  She loaded like a dream, getting the name "Trailer Queen" (TQ).

Soon we had two horses.  But horse #2 (#2) had issues loading.   My husband was able to get #2 in the trailer next to TQ and off we headed up to the cabin for them to spend the summer.

We never gave a thought to having any issues loading in the fall when it was time to take the horses home.  Guess we shouldn't have been surprised when it didn't go well.  #2 wouldn't load.  It was ugly - really ugly.  We tried holding carrots thru the front windows of the trailer, we tried loading TQ and leaving #2 behind.  We tried it all.

We had to leave #2 at the cabin, bringing TQ home by herself.  My husband returned the following weekend and with numerous hands from the local town, #2 was loaded.  I heard the loading was ugly.

Year 2.  Same issue getting #2 into the trailer but Husband got him in and once again the horses spent the summer at the cabin.  Fall arrived.  Husband got #2 into the trailer but once inside with the door closed there was more drama as #2 reared, getting his feet stuck up in the front manger, ramming both front legs thru the front and side windows of the Miley.  It was a real Rodeo getting his legs back on the floor of the trailer and a miracle nobody got hurt.  We got the horses home and called the vet. Thankfully minimal trauma to #2's legs.

Year 3.  Sedation of #2 and rental of a new (light on the inside) trailer.  And things were even worse!  Horses didn't go to the cabin that year.  Who could blame him when Husband said he was done getting bumped, kicked, stepped on, etc.  As far as he was concerned the horses could remain at home forever.

Year 4.  February rolls into March and there's a hint of spring in the air.  I want more than anything to have TQ and #2 at the cabin for summer.  I decide to take on the task of getting #2 loaded.

I purchase John Lyon's Leading and Loading video.  Every day when I get home from work I go into daughter's bedroom, pop out the "Barney" children's video and pop in my Leading/Loading video.  I watch it closely, reversing and watching it again.

Rain or shine I then walk up to the barn.  Husband has secured the trailer so I can (attempt to) load #2 without it being attached to the F-150.  I tie TQ to the fence and attempt to simulate what I've just watched on the video.  I don't have much time to work until dark arrives.  I feed the horses and head home to feed the family.

Initially I have an audience of neighbor kids and Husband watching me fumble with #2.  But soon the audience dwindles to only Husband.  Things aren't going well.  Husband shakes his head in concern as #2 rears, tries to kick, bump into and stomp on me.

After a few days Husband has also seen enough.  On his last day he leaves me saying, "If you aren't home by dinner I know you're dead".

But every day, rain or shine, I watch my video and head to the barn.  The days are getting longer and so I also work longer.  Getting home to fix dinner for the family no longer happens.  Although the danger is not past, I find I enjoy the solitude of being with the horses.

Rain and shine turns into more shine than rain.  #2 and I both sweat as we work towards resolving his issues.  I now wield my red lunge whip (which has protected me from rears, kicks and stomps) like a pro.  My movements are no longer clumsy and my timing has improved.

One day #2 steps up half-way into the trailer but immediately bolts back out.  I'm thrilled when I go home that night to report what I think is a break through.  Unfortunately, my family has long ago lost interest in my efforts.

A few more weeks and the big day arrives.  #2 loads into the trailer but immediately bolts back out. We half load and whole load many times, each time he bolts back out.  Ugh!  For the first time I find myself frustrated - we are so close!

And then it finally happens - one day #2 loads into the trailer and stands nervously.  I wait a few moments and then he quickly backs out, but he doesn't bolt.  He goes back in, stands and backs out a bit more slowly.  In and out he goes.

I am so excited!  I do the happy dance, looking around to tell someone, to show them that we (#2 and I are now a "we") DID IT...but all that meets me is my dog, always faithfully there with me each day.

Soon I'm able to close the trailer with #2 inside.  I now allow #2 to eat his grain in the trailer each evening while TQ eats hers at the fence where she's stood patiently tied each evening for over three months. Once #2 is finished I unload him, give him a good grooming and kiss him good night.  Yes, I have become fond of #2.

The snow has melted at the cabin and it's time to see how #2 does being hauled.  I'm scared when Huband gently tells me that it's time for me to learn how to haul horses.  I'm not so sure about doing this, especially with #2 in the trailer.

Shoer comes a few days before we leave and gives me good advice.  He cautions me to keep it low and slow when accelerating.  Tells me to look ahead and plan when stopping.  He tells me to keep extra distance between me and the car in front of me because I will need it if I must stop quickly.

The night before I leave for the cabin Husband takes me out for a driving lesson.  As we head out he reiterates what Shoer has told me and also adds how I must be careful when making sharp turns.

The palms of my hands are wet.  This is the first time driving the truck and trailer.  And although I'm grateful to know how to drive a stick, it's still a pain vs an automatic.  Being nervous is an understatement.  We drive through residential neighborhoods full of kids and dogs.  People stare at us, not used to seeing a truck and horse trailer.  We drive through business districts, now quiet after work.  We drive and drive.

I don't sleep well that night and the big day arrives too quickly.  Daughter is riding with me along with faithful dog.  I'm up early, loading the truck at home with our bags and food.  Tack was loaded in the trailer the night before.  All I must do is load the horses.

#2 and I are now One.  He senses that I'm nervous when I ask him to load and he becomes nervous. We go thru a few half-ins and bolting out.  But soon we both settle down to the routine we know so well.  TQ is loaded and waiting patiently.  #2 steps in and allows me to close the door.  I don't tie #2 in the trailer.  It is the one thing we never worked out, he just won't tolerate being tied so I allow him to stand free.

We are on our way but I'm tense and nervous.  I must drive over 100 miles across Snoqualmie Pass in Friday traffic in a 5-speed F-150 with a nervous horse in the trailer.  My Husband is at work but Daughter keeps him posted on my cell as we drive along.  Going up the Pass I find that we don't have much speed, sitting in second gear as we climb at about 20/25 mph.  I keep to the right and periodically wave at those passing me.  Yet going down the other side of the Pass I find that I must try to keep my speed down.

We get to our exit and head up the road to the cabin.  A sense of thrill, pride and independence fill me as we pull into Cabin Creek.  I get out and immediately open the door, unloading #2.  He comes out a bit quickly but not at a bolt.  He's covered in sweat, telling me how hard this trip was for him.

I pull the truck and trailer into the pasture.  We've had a good haul but there are still lessons to reinforce.  I leave the truck/trailer in the pasture.  I return the following day to once again work with #2 on loading into the trailer.  Throughout that summer we still periodically go through the loading lessons.

Ironically word is out in the local town that a woman has loaded and hauled this well-known renegade horse to the cabin all by herself.  The horse that wouldn't load has loaded.

Fall arrives and we haul the horses' home without any drama.  And from there trailer trips with #2 were sensitive but accomplished easily.

My work was finished.

We eventually sold the Miley and bought a 3-horse slant.  #2, whose name was Barnie, remained a nervous hauler who we always put in last and brought out first.  Yet he became so comfortable at loading that he once tried to load into the tack room of our 3-horse slant when the door was left opened.  It was all we could do to stop him before he climbed in.

Barnie became my Soul Mate.  A horse that would do and go anywhere I asked him.  I rode him alone (with faithful dog) in the mountains and through the neighborhoods full of kids, where we'd stop so they could pet him.  It was a sad day when I had to put him down due to old age.

We sold the F-150 and purchased a one-ton, 4-door (automatic) Dually to pull our 3-horse slant.  I now load and haul all of our horses.  Doing this has allowed me to do more things with my horses. Every time I come up our drive in the truck with a horse in the trailer I feel that keen sense of pride and independence.  That heady thrill that I can do anything I put my mind to.

I tell my Husband I feel Macho-Ette. 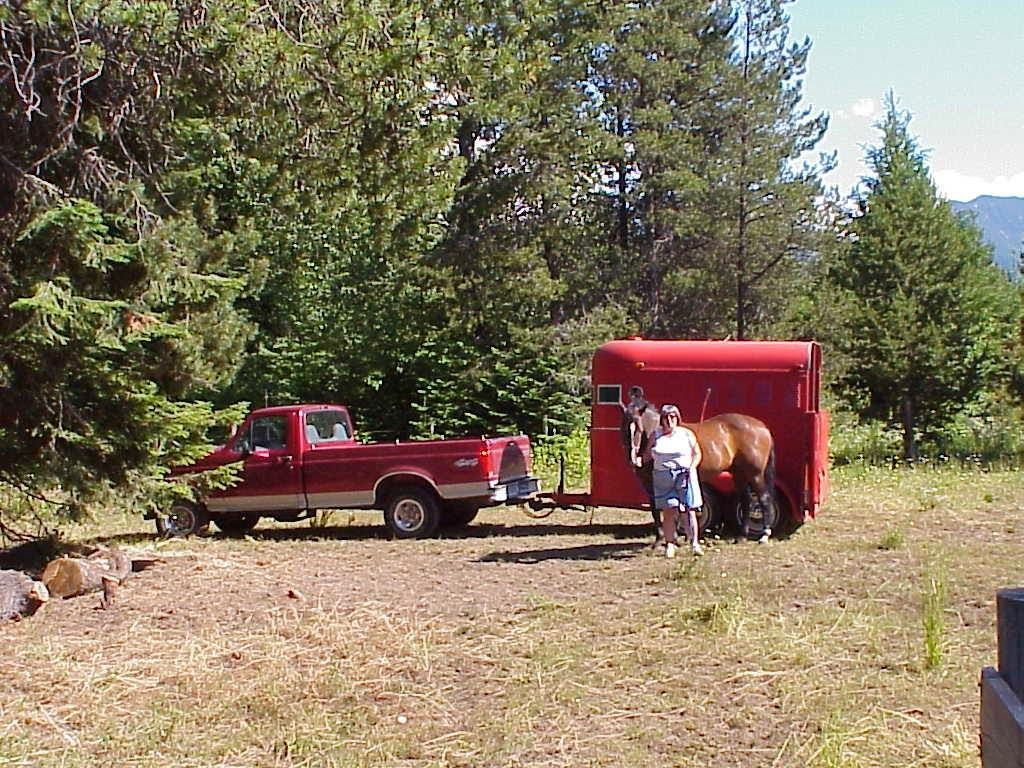 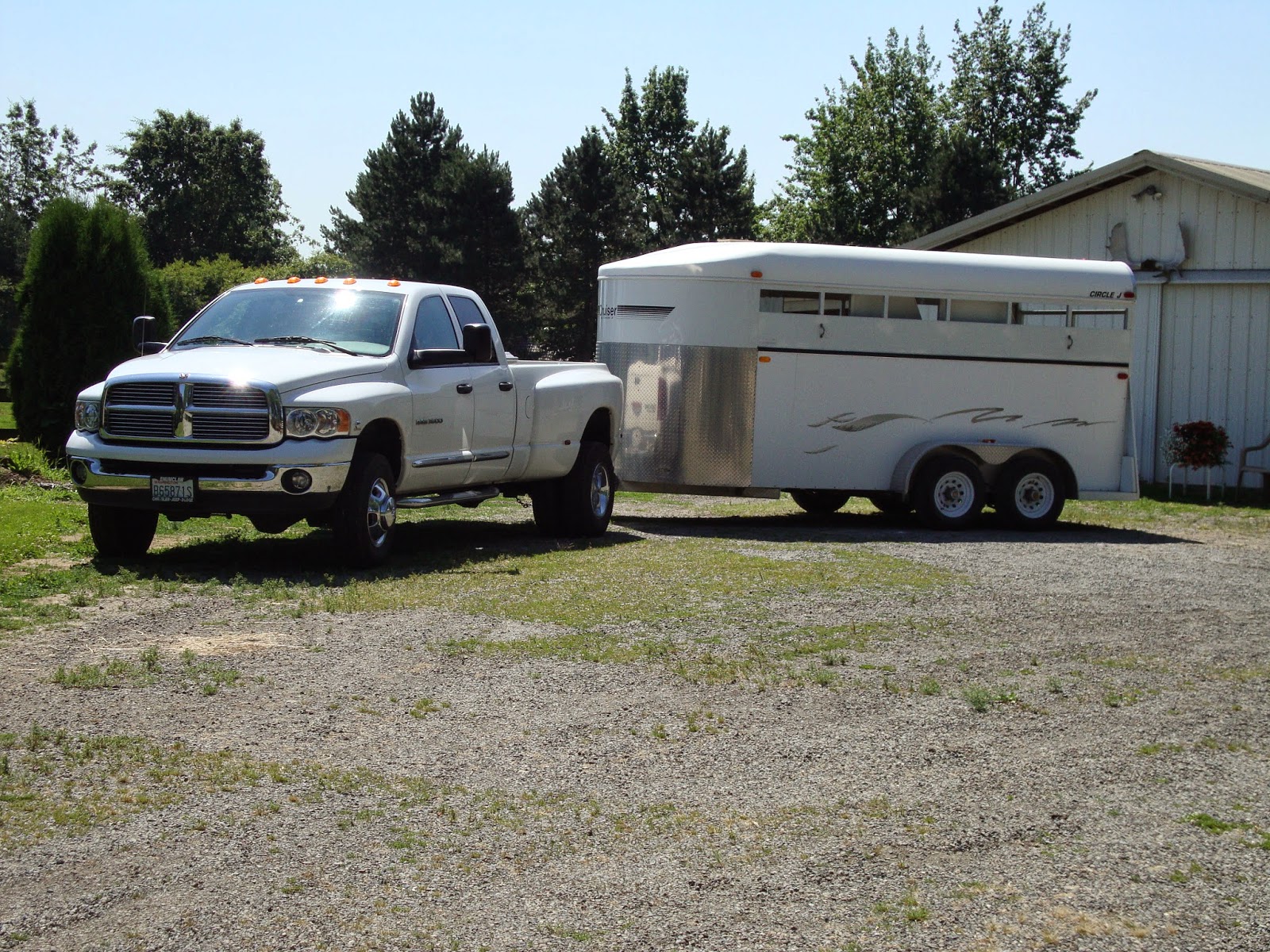 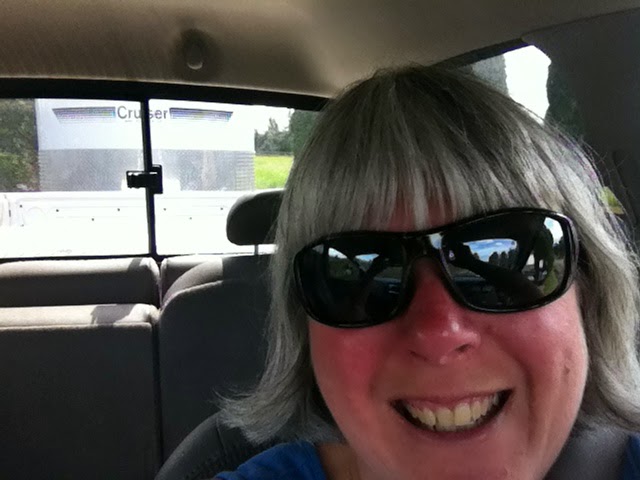