Until the Day He Dies

With 3 months to go, 2010 has been a tough year.  It was supposed be a year of bliss and happiness as I set off down the road of retirement.  But instead it has been filled with more heartbreak and sadness then in all of the years I've owned horses put together. 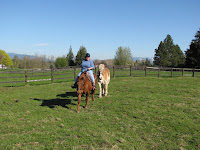 Cisco:  My been/there, done/that, confidence builder Quarter Horse.  I was so excited to have the time to ride him at home or head out on the trails around our home during the work week once I retired.

Champ (Want My Autograph):  The hard-headed, opinionated performance horse I inherited from our daughter when she moved onto college.  Many of my Posts in 50+ and my short-lived (http://www.lifeplushorses.blogspot.com/) are written around Champ. 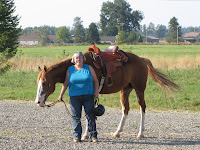 Champ was a real challenge for me.  I can't count the times I wanted to chicken out (or did chicken out) when I was headed up to ride this talented but obstinate horse.

Many times I'd rather have been doing anything but going up to ride this nasty beast.  Oh the excuses I'd come up with to avoid facing those rides!  But never have I felt the high and sense of accomplishment that I got when I did ride.  Nothing tops that successful feeling - or was it the joy of being alive?  Not sure.

Champ taught me so much.  He pushed my envelope.  I read up on Ground Work and applied the tools.  I established myself as the Leader of our Herd.  My rides became predictable and Champ and I bonded into an incredible relationship.

We were well on our way to becoming an intuitive team.  The day after the most incredible ride I'd ever had on any horse in my life,  (http://www.lifeplushorses.blogspot.com/  "A +10 Day", June 23, 2010), Champ became ill.  Six days later we put Champ down.  My family and I still grieve over this bigger than life, bright red Paint who eventually became putty in my hands.

But I was so lucky.  While I was preoccupied with Champ, I'd held off on replacing Cisco at home.  I had a mental list of what I wanted in my next horse.  I could recite that list in my sleep (in fact I did).  But I wasn't on the hunt for a new horse.  Champ and our challenges had my days filled. 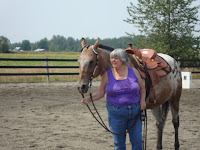 Two weeks before I lost Champ I met Poco.  He exceeded every expectation I'd ever had.  I looked forward to having him at home to ride.  I envisioned offering him out to ride to my novice friends.  I couldn't wait to haul Poco and Champ to Cabin Creek and go trail riding.

Now without Champ, Poco became my only riding horse.  His kind heart and gentle ways helped me through those early days of Champ's loss.

I had passed on a pre-purchase exam for Poco, thinking what did I need to know about a 21-year old horse?  Poco was in great shape and I had references from personal contacts who knew him before I bought him.

But something hasn't been right with Poco.  Weepy eyes had me accounting it to the flies.  I frequently cleaned his eyes but recently I noticed that Poco seemed to have an issue with movement on his right side, causing him to spook (so unlike him).  After a ride he'd stand with his eyes closed.  Fellow riders remarked about how I'd worn him out and he was "sleeping".  It worried me.

I had the vet come out to take a look at Poco's eyes.  The diagnosis is Moon Blindness.  My horse is going blind.  His right eye is already pretty much gone.

Would I have passed on Poco if I'd had a pre-purchase exam?  Probably yes.  So I'm glad I didn't have one because of all the horses I've owned, Poco ranks in the top 5.  I'm glad I bought him.  Who knows what might have happened to him if I hadn't?

Pity isn't going to help Poco in the future, but an assured rider will.  And for a 50+ rider who has worked hard on her confidence, this is just the Call I need to show Poco how assured I can be.

My commitment to this horse will be about comfort and trust.  Moon Blindness is painful.  I've got a meds if needed and my vet has versed me on degrading danger signs as well as assuring me to call him if things become worse.

Although I've been warned by my vet to not take Poco to unfamiliar places where he might have issues, I plan to continue to ride Poco, starting with the confines of the indoor arena with a goal of keeping him in touch with the world he used to see so clearly.  What we do will depend on his comfort zone both physically and mentally.  I refuse to force or push him into some place where he isn't comfortable.  But I also refuse to baby or pity him.

Poco will be my horse until the day he dies.