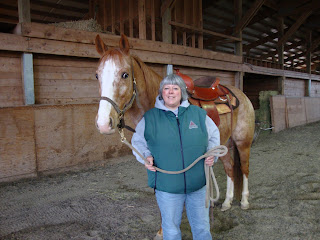 I've been down the trail of looking for a new horse before.  I've been down it enough to know that my passion for what I'm seeing blinds my common sense.

Thank heavens for my good friend and Trainer, Rachel Koehler.  She spent most of the last week with me while I looked at one horse multiple times and online at many others.  In seven days I've spun like a wind chime on a windy day as far as what I saw and what I wanted.

My first jump into the water of horse shopping started when I joined Rachel and her friend, Kori, who is looking to replace the horse she just retired.

We met to look at some horses at a barn near our homes.  Upon the horses we looked at were some Mares that Kori was interested in.  I prefer Geldings, especially with a breeding farm next door and Stallions on my fence line.  The eight year old Appaloosa, Mick, pictured above, was a horse that caught my eye.

As soon as I saw Mick I got a huge lump in my throat.  For the first time since I lost him, I had encountered a horse that brought Champ back to me.  It was the inquisitive look in his eyes and the freshness in him during ground work.  It was confirmed even further when Rachel rode him and I saw the shimmer of that slow, western jog.  Champ's trademark.

Here was a horse that wasn't finished but had the potential to be a horse I could take sorting on Friday, to a Schooling Show on Saturday and out on a trail ride on Sunday.  That was the kind of horse I was looking for.

When Rachel finished riding him, I told her that I thought this might be the horse for me (see what I mean about passion of the moment)?   Thank heavens that Rachel has my number big time.  She told me that we needed to come back and ride a few more times.  I wasn't to worry, there was nobody else currently looking at Mick.

Rachel, Kori and I returned mid-week to ride the horses we were interested in.  Rachel put Mick through his paces on the ground and then she rode him first while I watched. 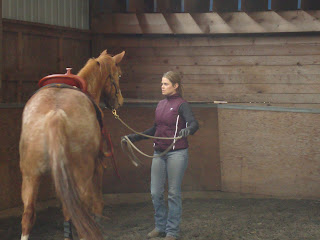 When I climbed up on Mick he stood quietly.  They say he has a quiet mind and I felt that.  I rode in a snaffle with long parachute reins and I had some challenges keeping the reins even.

Rachel tells me that I have unusually soft hands.  I found that soft hands didn't work so well on Mick as I headed into the trot and lost my seat.  He was speeding up, almost loping and I wasn't ready for that.  I found I needed to be in total connection with him and I struggled with that, feeling like I was pulling on his mouth.

I finished my ride but found I was unsettled by his rough trot and the feeling of losing control as we moved forward.  I found it ironic that two years ago I didn't know the difference if a horse moved off my leg or not.  Today I seek reassurance that I'm in control and the horse moves off as I direct him to versus shooting forward like a bullet.
I left my ride contemplating this experience and feeling a bit deflated and frankly a bit embarrassed that I flopped around the saddle like a fish out of water.
During the next two days I ran my ride over in my mind many times.  Rachel suggested I get on Dream Horse and see what was up there.  It didn't take me long to find a long list of horses that met what I was looking for (sorting, showing, trail rides) and that were a bit more "refined" than Mick.  But their costs were higher then I was prepared to pay and Mick was a horse I could buy now.  I could hear the words like a low level commercial, "Hurry!  Don't Wait!  Buy Now!"  Ugh.
After a few sleepless nights I realized that Mick does have a lot of possibilities but he isn't "there" yet.﻿  Sure I could buy him "Today!" but I'd spend the next "Tomorrow's" with him in training to bring him to where I want him to be.
Those "Tomorrow's" would take time and cost me more than saving up additional funds to buy a horse that I could bring home and immediately take out on a trail ride on Friday, to a Show on Saturday and Sorting on Sunday.
I called Rachel and told her my decision.  She was very supportive and agreed with me.  But I still had this tiny voice in my head that...maybe...just maybe...Mick might be "the one".
I returned back to the barn over the weekend to meet Rachel and drop off some tack.  She had brought a client with her.  They were there to look at Mick.
It was a real shock to go to Mick's stall and find he now recognized me.  He nuzzled me and I knew he'd remembered me from the past week.  Mick was brought out and saddled up for the new client to ride.  I wanted to say, "Heh, hold on!  He knows me!  I've changed my mind!"  But I'd already declined Mick and he was open game.
I stood silently watching as he was ridden.  It hurt to watch and it was no surprise that they liked him although part of me had hoped they wouldn't.  When they finished riding and started talking "business", I knew it was time to leave.  I discretely bid my farewells and with a lump in my throat I headed out the door. 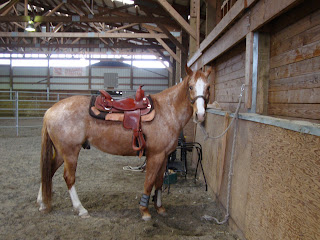