Three Is a Crowd

The first week Poco was home brought many days with nasty weather.  We had winds over 50 mph along with heavy rains.  The Belgians headed to their loafing shed to get out of the weather.  But where was Poco?  Way out in the pasture, standing there looking confused because he could no longer see his next door neighbors.

I noticed the hay I'd left in his loafing shed was barely eaten during the day and not touched at all overnight.  I also noted his water trough level didn't move.  I'd like to think the water level didn't move due to the heavy rains and that Poco was drinking out of the puddles in the pasture, but not knowing if he was getting enough water concerned me.

During the daylight when the Belgians were visible, Poco did pretty well.  He'd go into his loafing shed and grab bites of hay and then return to stand happily out in the pasture within sight of his new neighbors.  But when the Belgians were not visible Poco wouldn't get out of the weather.  There he would stand, back to the wind and rain, head down, getting soaked to the skin and looking miserable.

I became so worried about Poco that many times I stood in his loafing shed trying to coax him in.  When I could get him to come to me I'd take him inside to a stall filled with fresh shavings.  He'd arrive to his Senior Feed, hay and water.  He could see the Belgians in their loafing shed from his stall so he'd happily settle down to eat and drink.

But keeping Poco in a stall full time was not an option I wanted for him.  Being a firm believer that having horses outside is better for them and with pastures and loafing sheds, I really want my horses outside as much as possible.  I decided it was time to give Poco a buddy to see if it would address my concerns and make Poco the happy horse I want him to be.

I brought Sunny, our older Belgian into the pasture with Poco.  They had shared a pasture for a short time last summer.  Sunny is a kind old soul and so I figured the introduction would be as uneventful as it was.

But now I had to contend with Gus, our younger Belgian, who voiced how unhappy he was with my decision to leave him alone.  Now it was Gus who stood outside trying to catch a glimpse of his buddy, who had abandoned him.

After a few days of this I decided it was time to put everybody together.  I opened up our spacious front pasture and let the three horses out together.

Gus immediately took the lead position; Sunny took second in command and Poco third.  Poco didn't seem to care about who was in which position.  He just wanted to happily graze where he could sense another horse nearby.  Since then life on the ranch has settled down. 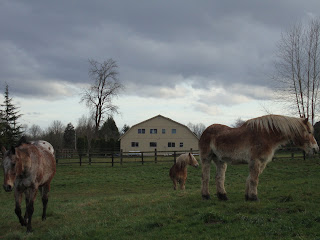