Ladies Night #7:  The Ladies had all received an email earlier in the week from Rachel informing us that she'd split us in two groups and what time we should plan to arrive for our final Ladies Night.

I had been placed in the first group who were scheduled to ride in the mid-afternoon.  We were returning to Fiddleback Ranch which had been set up on this night so we could all try our luck at sorting cows. 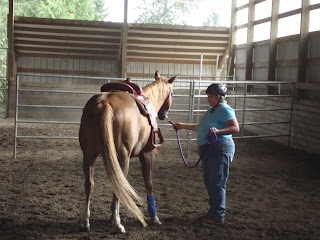 On this cool day, the first after many hot ones, I hadn't planned well.  I arrived with just enough time to saddle Bob up and do some minimal ground work before we started.  I hadn't ridden Bob for over a week and he was pretty fresh. I'd also purchased splint boots for Bob the day before but hadn't had a chance to try them out on him.

Bless this horse for his patience!  He stood quietly while my Cowgirl Pal, Kyle helped me put the boots on.  But when I went to lead Bob down to the arena it was obvious that he'd never had something like this on his legs before.  His first dozen steps were comical as he raised his feet high in the air and tried to adjust to their feel.  I was so grateful that he quickly adjusted to wearing them.  But that seems to be Bob.  He checks out what's new and once he's assured it's OK, he moves on. 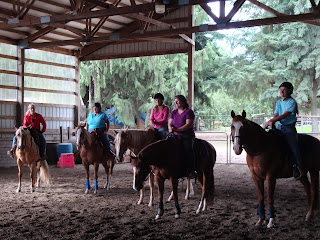 Once on Bob, we lined up to wait for directions. 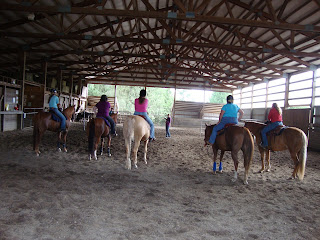 Rachel, our trainer and friend (Frainer) giving us a head's up on tonight's sorting, telling us to take our time and not hesitate to stop and make adjustments if our horses need it.  Two sets of cows are behind her waiting in pens outside. 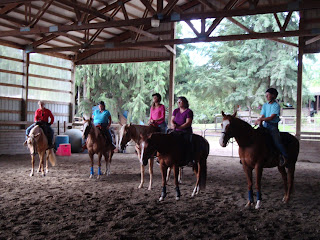 In the above picture I can see that Bob has already spotted the cows in the pens behind Rachel.  I know this look!  It's the same one Bob has when he stands in our pasture and looks intently across the fields at the cows in the distance. 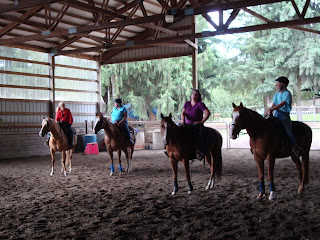 Now the other horses have spotted the cows... 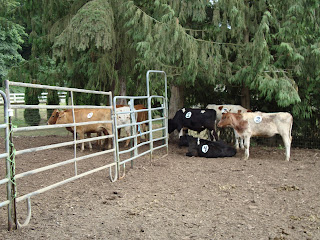 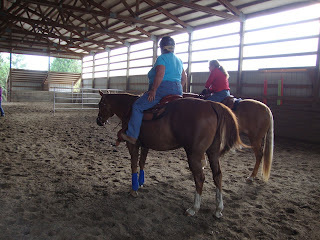 We watch and learn from those who are in the pen with the cows... 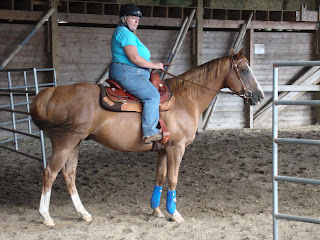 Bob and I guarding "The Hole".  It's our job to make sure that the right numbered cow is the only one who gets through "the hole".  We must turn back the others who want to follow and also keep those already through from going back into the pen. 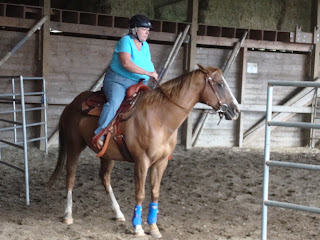 In this picture there are cows immediately in front of Bob.  They are trying to break through "the hole" and join their friends on the other side.  I have to laugh at how intense we are!  But our partner inside the pen is doing her best to move the right cow and we don't want to let her down by allowing the wrong ones to get through. 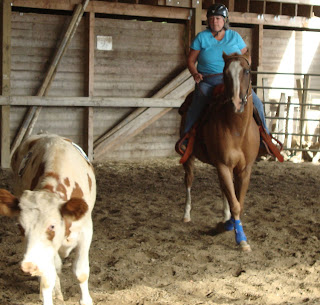 Moving our cow through the hole.

The time seemed to fly by.  Suddenly it was time for us to call it quits so the cows could take a break and we could get loaded up and on our way before the next group of Ladies arrived.

There was a feeling of sadness as we all loaded up and followed each other down the road, waving out our windows to the second group who were now arriving.  As we broke off on our various directions towards our homes hands waved outside open windows and truck horns honked farewell.