So many events have taken place since I last wrote a Post.  Events that I've wanted to write about, events that have had me stop and ponder before I shared them. 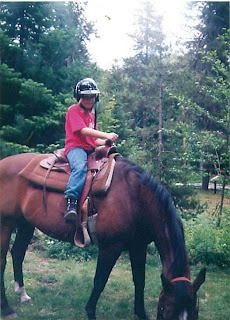 He was a big, strapping horse. Black with a white blaze.  His name was Barnie.  He belonged to a neighbor of ours who lives in the Cascade Mountains, at the same place where we have a cabin.

My first ride on Barnie was at the cabin in early October on a sunny, crisp day.  I rode Barnie while a friend rode Red, the little horse that lived with Barnie.  We traveled the old logging roads around in the area for hours while the brilliant red and yellow maples whispered in the breeze.

That ride changed my life.

I remember it so clearly.  After our ride I returned to the cabin and sat on the arm of the couch next to my husband.  I had turned and told him that the ride I had just experienced was spiritual.  It had touched my inner core.

I told him that it was time.  After waiting all my life, at the age of 40+, I needed to accomplish my life-long dream.  I was going to buy a horse.

And the very next weekend that's exactly what I did.

Fast forward six weeks later to Thanksgiving Weekend.  Winter had come early to the cabin, hitting hard and leaving over 3 feet of snow.  Our cabin neighbor called, explaining he had been unable to find a place to winter Barnie and Red.  The horses had no shelter from the snow and he was concerned about Barnie.  Red, the dominant little horse, wouldn't allow Barnie near any food.  Could we help him out and take one or both horses for the winter?

My husband and I agreed to bring Barnie to our home where he would winter with our horse.  Red would go to my sister's farm.

The next day my husband and brother-in-law hooked up our old Miley trailer and headed into the mountains to rescue the two snow-bound horses.  My husband recalls wading through snow to reach the pasture where the two horses stood almost up to their bellies in snow.

His first view of Barnie broke his heart.  The gorgeous black horse had been reduced to skin and bones.  His head hung down and he could barely stand.

Getting the horses out of the cabin was a challenge.  The truck was chained up but couldn't get any traction once the horses were loaded in the back of the trailer.  A neighbor brought his huge diesel Cat out and hooked it onto the front of the truck, pulling the truck and trailer through the snow for four miles until they reached town.  It was a rough ride for the horses in that trailer.

After dropping off Red at my sister's farm, my husband headed home with Barnie.  He called me on the way, warning me to be prepared at what I was about to see.  He told me that we needed to get the vet out as soon as possible.  Barnie was so weak he wasn't sure he'd even make it through the night.

I was ready for them when they arrived.  It's hard to write about the emotions that went through me when Barnie was unloaded.  Years later as I write this, tears still come to my eyes.  The tall, gorgeous horse I'd ridden stumbled out of the trailer, shrunken in size and with every bone showing.

We settled Barnie down for the night but weren't sure what we'd find the next day.  Yet the next morning Barnie was still on his feet.  He'd not only made it through the night but had established a bond with our horse.  The vet arrived, shaking his head at the condition of poor Barnie and leaving us with a feeding plan.

Winter passed to spring and Barnie, although now with some sway in his back, returned to the horse he once was.  His days were spent grazing with his best friend.  This family had all fallen in love with Barnie so it was a no brainer when our neighbor called us that May and asked us if we'd like to keep Barnie.  Seven months after that October ride, Barnie was now our horse.

We gave Barnie most of that year off, getting his feet back in shape and watching his muscles return.  We found Barnie's behavior was fine in the pasture as long as he was with his best friend.  However, separating the two of them was dangerous.  Barnie went into a panic when he wasn't with his best friend, rearing, striking out, pushing into, pulling away and stepping on us.

For the next two summers we tried to take the horses to the cabin with us so we could ride the trails.  But we had issues with Barnie and the horse trailer.

We might get him up to the cabin but couldn't get him back in to go home, having to leave him there until we finally got him in the following week.  Another time he reared inside the trailer, his front legs breaking through the front trailer windows (thankfully injury was minimal).  We tried a sedative before we tried to load him (made it even worse), we rented a larger trailer (didn't matter).  Eventually we gave up taking the horses to the cabin.

But I had this dream.  I wanted to take another ride like the first one I'd had on Barnie.  I was bound and determined to get him up to the cabin...safely for all concerned.

The third year we had Barnie I was now reading horse magazines, especially interested in the training portions of the magazines and what might help resolve our issues with Barnie.  In late winter I purchased a John Lyon's Leading and Loading video.

Every evening after I got home from work and before I went up to feed the horses, I went into our daughter's bedroom and popped out Barney (the Dinosaur) and plopped in the Leading and Loading video.  I watched it intensely, sometimes more than once when I needed to validate exactly what I was supposed to do.  I'd then head up to the barn to try out what I'd just watched.

My husband secured the Miley trailer in the pasture and each night before feeding I practiced trying to load Barnie.  Initially my husband and a crowd of neighbors watched my efforts.  It wasn't pretty.  Barnie would rear at me trying to strike me with his front legs.  He'd sunfish and try to kick me with his back legs.  I recall my husband telling me one evening, "If I don't see you tonight for dinner, I'll know you're dead."

But each evening after work, rain or shine, as spring started to return, I practiced what I'd just watched on that video.  And one day almost 2 months later, Barnie went halfway in the trailer before bolting out.

More than another month passed.  Barnie would go half way in before bolting back out.  Every night I practiced.  Nobody came to watch my efforts any longer; they'd all lost interest months ago.  It was just me, Barnie, his best friend tied at the fence, and the horse trailer.

More time passed and finally true success!  Barnie went all the way in the trailer and stayed there until I asked him to back out.

Barnie no longer fought me at the trailer.  He stood quietly.  Although he initially still loaded half way and then came out, he'd eventually load and stay until I asked him to back out.  I started to feed him his grain in the trailer each night with the door closed, as if we were ready to haul.

Not only did Barnie now load, he also now lead like a dream and stood quietly when tied.  But the most important thing I noticed about Barnie, a reward I never expected, was how he had bonded to me.  When I was around he was tuned to me like a radar.

I'd never ridden Barnie, always riding our other horse.  But our other horse, purchased at an older age, was now starting to fail.  I wanted to ride the horse that I'd spent so much time with.  The horse I'd ridden years ago.

My confidence level was -100.  After all I'd seen of Barnie's past behavior, I wasn't sure what would happen when I got on him.  My first time up on Barnie I didn't go anywhere.  I sat on him at the fence with my heart beating, waiting to see if he would explode.

I still laugh and what happened as we stood there.  Barnie turned his head all the way around and looked at me as if to say, "Why are we standing here?  Aren't you going to do take me for a ride?"  I laughed at him, but was still too afraid to ask anything else of him.

But I went home and played that experience over and over in my mind that night and the next day, with sweaty palms, I rode Barnie from the fence over to a bush in the pasture and back again without any issues.

The next night I rode Barnie all over our pasture.  He did anything I asked of him.  It was like we were of the same mind.  It was incredible, everything I'd always dreamt of when I thought of riding.

Soon Barnie and I were riding all over the neighborhood and on the local beach.  Barnie stood quietly as children ran up to pet the black horse when we passed by.  We rode in the sun, wind and rain.  One day we rode when it was snowing and I still recall looking down and watching his black mane turn white with snow.  On our rides I could hear our other horse carrying on in the distance about being left behind.  But the horse that used to fight to be near his herd mate now paid no attention to being out alone with me.

With our trailer lessons behind us I was ready to take Barnie to the cabin once more.  I'd never driven with the horse trailer.  My husband taught me how to hook it up and then took me out for driving lessons the night before we left.

The next day I loaded both horses and headed over the mountains to the cabin.  I drove the trailer through the gate and into the pasture to unload, wanting to be able to practice some more loading/unloading during the time we were at there.  I wanted to be sure we'd have a positive load when we headed back home. 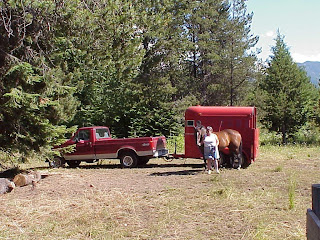 Although wet with sweat, a sure sign of how nervous he was, when I opened the door Barnie calmly came out of the trailer.

I saddled up Barnie and we headed off alone into the woods.  Up we went onto the old logging roads that I'd initially ridden him on three years earlier.  Today I still recall that as my "ultimate" ride.  Barnie and I, silently talking to each other on the trail.  No fear, no fuss.

....and that's the way it was with Barnie until the day he died of old age.  We completely trusted each other.  We were an intuitive team.  It was the ultimate in the horse and rider relationship.

Maybe you've been here with your horse?  If so, you know what a incredible, magical this relationship is.

I've tried to find that relationship again with each horse I've encountered since Barnie but sadly it's evaded me.  I had come to the conclusion it was a once in a lifetime experience.

But recently I've been wondering, if maybe, just maybe... 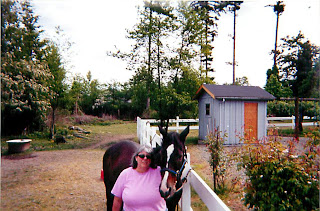