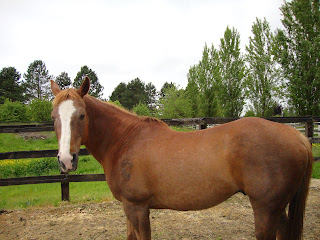 I remember when I went to see Bob for the first time. His owner was a wary woman who seemed hesitant about selling her horse. When we talked I felt I was being interviewed.

It was obvious she was trying to determine if I was an acceptable candidate for her horse.  Later I found that she had turned down other prospective buyers.

I recall her telling me that Bob was a one-on-one horse.  I wasn't quite sure what that meant.


When I returned the next day to test ride Bob, his owner had initially observed me and then dropped her head and turned away.

I wasn't sure what to do!  So I thought the best thing was to politely keep riding and act like nothing was wrong.  She had eventually composed herself and turned back to me.   Looking up at me in a choking voice she had said, "He likes you".


I had passed the interview.

I've had Bob for almost a year.  For the last three months he has been the only horse I own.  Maybe it's that I've got more time to devote to this horse, but this one-on-one environment has allowed us to bond, creating a relationship I never thought I'd see again. 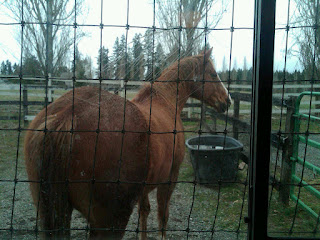 Bob parks himself outside my office window while I work.

Sometimes he naps (he snores). 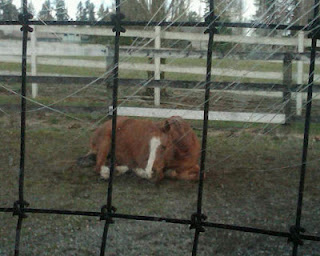 No matter where I go or what I do at home, Bob is like a radar - tracking my every move.

Our relationship had me wanting more.  Just like the first time I sat on Barnie at that fence, I wanted to take our relationship further.  Bob had been a good guy at lessons and cattle sorting but it entered my mind that although that might be great fun for me, how much fun was it for Bob to always ride in an enclosed arena?

I wanted to branch out further but was hesitant.  Could I trust this horse?  My answer came to me one day...in the shower.  I asked myself, "What was more dangerous? Riding Bob alone in the pasture or getting into this slippery shower each morning?"  Either way, if I fell it would be hours before being discovered.


Didn't take more than 3 seconds to decide that I'd rather fall from Bob than in that stinkin shower. 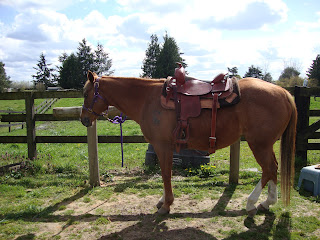 On a nice spring day, when nobody else was home, I opened up the gates to the winter pasture and saddled Bob up. 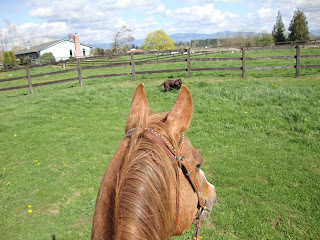 Infact it was REALLY GREAT!!  It was so incredible that when I unsaddled Bob that day our bond was even stronger.

And so starts an incredible journey - one I never thought I'd get to take again.  I'm sure Barnie is looking down from Horse Heaven and nodding his head!


Ground work addressed his behavior; however, there were specific approaches in the ground work to avoid.  If I lunge Bob, asking him to reverse often (as in a half circle), it intensifies his behavior.  If I lunge a few laps and stop him before going the opposite direction, it settles him down and draws his focus in.

Bob had the type of background I was looking for.  I purchased him and spent the last year hauling him to weekly lessons and joining my Cowgirl Pals at sorting events.

I found Bob "sensitive" when we arrived at a new location.  Before a lesson I would walk him around the arena and let him smell the items that sat in the corners.  Once he checked everything out he was fine.

At sorting events it was difficult.  Due to parking restrictions, we arrive with only minutes to spare before we are called into the pen.  Bob doesn't do well with the rushed atmosphere.

Don't get me wrong, I don't advocate tippy-toeing around my horses.  But I also believe in giving the horse a chance.  And in Bob's cases, he carries some baggage from someone who once owned him.