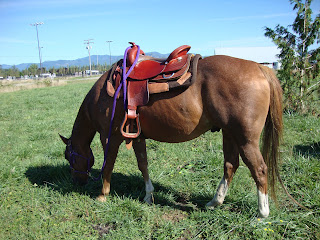 The clouds that brought us snow, hail, sleet, rain and wind finally cleared and last Sunday I got a chance to ride Bob.  It was the first time I'd ridden him since I'd hauled him into Mike's Western Supplier and had Mike evaluate how Bob's saddle fit.

Mike had determined that the saddle did fit but that it was riding forward a bit and pinching Bob on his shoulders.  Mike had recommended an additional pad.

With Monday's lesson coming up, I knew it would be a good test to ride Bob on Sunday and then see how he reacted when I rode him the following day at my lesson.

Sunday's ride went well.  This was also the first time I'd ridden Bob with a back cinch.  When I'd purchased Bob I'd been informed by his previous owner that he'd used one before.  However, I'd chosen to do extensive ground work with Bob before riding on Sunday just to make sure there were no issues - which there weren't.

The proof of test was our lesson on Monday.  As I'd saddled Bob up I noted the missing turn of his head when I cinched him up.  Just blubbering sighs.  A good sign.

We had hauled up to the barn and I'd again done some ground work before climbing on for my lesson.  Bob had appeared much more comfortable.  I could feel it in how he moved.  No more raised back and swishing of the tail.  He felt great.

Bob's a pretty smart guy.  It appears that he's gotten a bit...lazy?

Yup...and smart enough to know that when given an inch, he'll take a mile.  (After all, he IS a horse (but don't tell him that)).

This is probably because the last few times I rode Bob I sensed that something was wrong and wasn't firm when I requested something from him.  And even though there was something wrong, Bob has realized that just maybe...he doesn't have to do all that is being asked of him.

When riding on the rail, Bob will slide off of it and move into the center.  Bob knows this is where he has been allowed to stop and take a break while my Frainer and I discuss my riding.

No longer!  Now there is more leg on the rail and Bob is stopped somewhere along it instead of in the middle.

Another issue was simulating sorting.  (I love this part of my lesson!)

Bob and I are parked between two cones, simulating we are guarding the gate.  My Frainer simulates being a cow and tries to run past us through the gate.  Bob and I must do turns to fan his front end (quickly) from right to left and back again in an attempt to keep her from passing us.  This means I must constantly be using my legs to keep Bob's back end from moving as I turn his front.

Bob was initially slow and sluggish this week when I tried to move him.  I got the message loud and clear, "Oh she really doesn't mean it."

I did mean it.

Increased pressure of my leg resulted in a surprised grunt from Bob.  From that moment on it was obvious he had gotten the message.  I couldn't help grinning because I loved his increased response and knew he no longer had my number.  Instead I had his.

With the boss established, the rest of my ride was great.  Lots of blubbering sighs from Bob and fun for me. 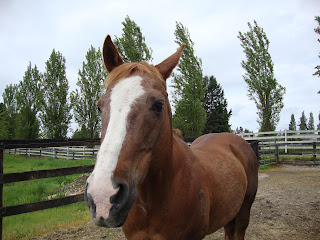