I've been on a journey and I didn't know where it was going to lead me.  I've tried to make this Post as brief as I could, but it's been quite a journey and there just isn't any other way to describe it but as I've done below.

So get comfy and join me.

Last summer when Bob didn't have a pasture buddy and I didn't have a horse to ride, I came up with a crazy idea.  I didn't have the cash to buy a horse but I did offer a good home.  I put a call out to my equine friends asking them to keep their ears open for a novice/intermediate horse that might need a good home more than the cash of a purchase.

Summer passed.  I forgot all about my big idea as Bob and I adapted to our situations.  So I was surprised last fall when a text message lit up my phone with the words, "Are you still looking for a horse?"

I didn't recognize the number and by nature hesitated in responding.  Bob and I had gotten so close, was I still looking for another horse?  I saw Bob out in the pasture watching the neighbor's horses and knew I couldn't replace his need for a pasture buddy.  Plus I missed riding.

I replied, "Yes."  Sent the text and followed up with, "Who is this?"  I received an immediate response, "This is your Vet.  I may have a horse for you.  Sending picture, call you later." 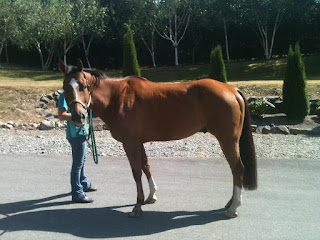 This picture arrived of an Appaloosa gelding.  Later that day my Vet called to tell me the horse belonged to a young boy and had been trained for Western Pleasure.  But the boy had decided to change disciplines to Dressage.  They had moved to a new barn and after a period of time the horse became sore, prompting a call for the Vet.

Diagnosis was that this stock horse, used to being compressed for Western Pleasure wasn't cut out for the stretch of Dressage.  Changing disciplines had pulled muscles and now required some re-hab time.  The Vet believed the owners would be seeking a different horse for their son and might consider giving the Appy to a good home.  Was I interested?

A few days later the owner called and we discussed our horse situation and goals.  The following weekend my family and I took a road trip to their barn.  Meeting the horse impacted all three of us the same way.  He was just incredible and memories of Champ, the horse who prompted me to start this Blog years ago, flooded back to all of us.

The owner explained that they were still in the process of determining the extent of the re-hab program.  We left with the understanding that we would wait for additional tests to be completed on the horse and in the meantime I would send them pictures of our home and they'd arrange a visit to our place.  On the drive home and for days afterwards my family and I talked about the horse we'd met.

Emails passed back and forth.  A few weeks later I received an email saying their current horse would remain where he was for re-hab and afterwards if we were interested, the owner would offer him to us at a reduced price, explaining that he needed to recoup some of the fiscal loss of the horse for his son's new horse.

My heart sunk; there was no way we could afford this horse.  I wrote back to the owner, thanking him but telling him that I would need to step back from this opportunity because I wasn't in the fiscal position to make such a purchase.  I wished him the best with the horse and told him that if for some reason the situation changed, to not forget us.

Time passed and I got Bob on his own re-hab program and Prince came into our lives.  Yet the subject of the horse we'd seen that day always seemed to pop up.

The owner called the following evening.  The horse had finished re-hab.  He had returned to Dressage training but they quickly realized that this discipline would never be a good fit for him.  Their son had moved onto a different horse and they now found themselves with two horses, one which was now only ridden by the trainers at the barn.  The incredible horse we'd met last summer needed a home where he'd get the love and attention he deserved.

I was direct - we would love to have this horse, but our fiscal situation had not changed.  I was shaken to my very core when the owner told me that they loved this horse and all they wanted was to find him a good home where he would be loved and treated well.  The fiscal situation would not be an issue.  We set up a date to return to the barn so they could meet us again. 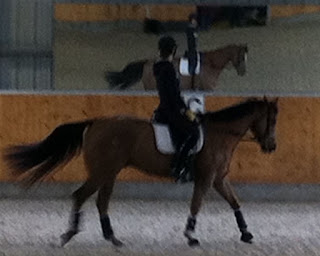 The following Saturday my husband and I made a second road trip to the barn to meet the owner, son and watch the horse be ridden.  This was not yet a done deal and we were uncertain how the day would turn out.  All we could do was be ourselves and hope for the best. I helped the son saddle the horse and a trainer first rode him in Dressage and then put him into the slow jog and lope.  He was incredible.

I helped the son unsaddle the horse, telling him all about Bob and Prince and answering any questions from either of them.  We walked the horse back to his stall and then stood talking about anything and everything, just being us.  Numerous times I excused myself so I could go into the stall and visit the horse while he ate his lunch.

When would we like to pick him up?  A date was set. 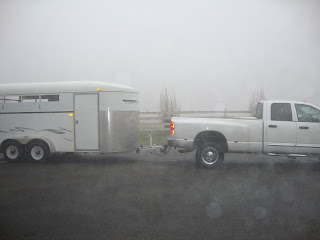 And on a foggy morning last Friday, my husband (who took the day off for the event) and I hooked up the trailer and took another road trip. 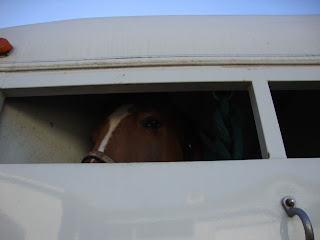 To meet the owner and load up a beautiful 7-year old Registered Appy Gelding. 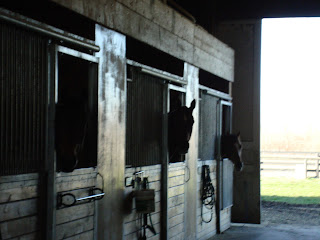 And deliver him (in the foreground) to the barn near our house where I've boarded off and on for the last six years (and where all my Cowgirl Pals board).  Here we will get to know each other, take lessons, join friends on trail rides (and maybe even move some cows).
And friends, that's the journey I've been on since last September.  How many times I wanted to share it with you...but like any journey, I had to finish it first. 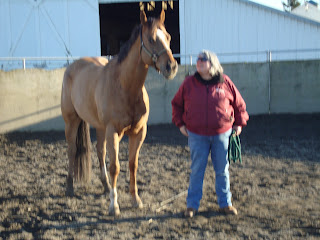