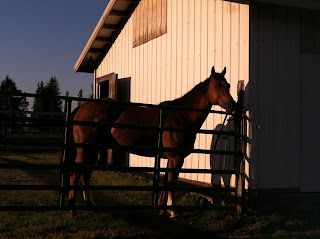 I left Elvis in the paddock that night after his arrival.  He wasn't happy about being alone and called out.  All...night...long.

Elvis still has a "baby horse" voice, which is also high pitched.


All...night...long my family (who had to get up early and go to work) and I could hear him.  This resulted in a sleepless night for all (and some grumbling the next day).  I knew that I had to make some adjustments before the following night. 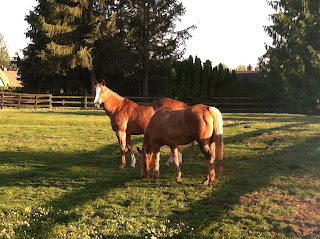 The look on Bob's face the day Elvis arrived concerned me. 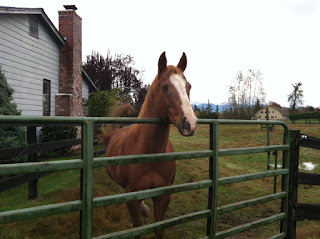 I was concerned about how Bob would accept Elvis.  After the horses had spent about eighteen hours on each side of their gates sniffing and watching each other I felt it was as good as it was going to get and decided to put them all together.

I opened the gate and Elvis slowly meandered through, put his head down and started grazing.

I still have to laugh at Prince and Bob's response.  They'd been grazing at the other end of the pasture and hadn't noticed the new arrival.  Suddenly they sensed a stranger in their midst and both of their head's popped up at the same time.  Within seconds Bob was running over to check Elvis out (while Prince returned to eating).

Elvis is a horse that has been stalled most of his life.  He was in bliss to be in the (eaten down), green pasture.  With the innocence of his isolated life, he appeared to have no idea there might be a conflict brewing.

Bob immediately got Elvis moving - but only a short distance because all Elvis wanted to do was graze.  A routine developed.  Bob would push Elvis, who would only go so far before returning to graze.  Bob would return ears back and teeth barred.  Elvis would move further away and then return to grazing.  Bob would return.

Eventually things settled down, probably because Bob, out of shape from a year off, was exhausted.  The day ended in blessed silence and a good night's sleep was had by the household.

Yet I discovered the dynamics had gone up a notch the following morning.  Bob could now quickly run Elvis off.  The bite marks on Elvis's rear haunches told the tale.  But what really concerned me was that Bob wouldn't let Elvis near the water trough.  Elvis needed free access to water.

The decision was made.  Picking up Bob's halter I went out to the pasture where he came up to greet me.  Muttering, "Sorry Buddy," I slipped his halter on and led him into the paddock where I had kept Elvis.

Bob was not pleased with this change of plans.  He only had peak-a-boo view of "his herd".  He ran frantically from one end of the paddock to the other, calling out to the other horses, who had returned to a grazing peacefully.  He physically charged the two gates that separate the paddock, continuing to ram them repeatedly with his chest and requiring me to chain them closed. 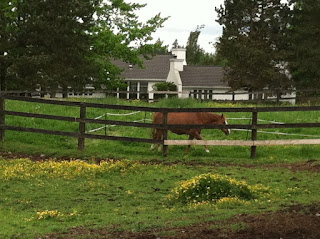 I knew if Bob could see the other horses that he'd settle down.  Although I couldn't give Bob full access to the adjacent pasture because the grass is currently too rich, with my husband's help we set up a small area in that pasture with temporary hot wire. 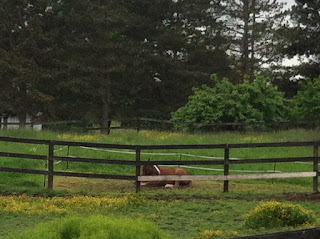 Bob could now see his neighbors and settled down. 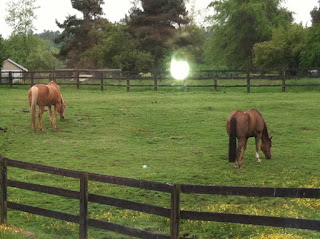 Prince became the head of the "herd of two" but since all he wants to do is eat, there is no conflict. 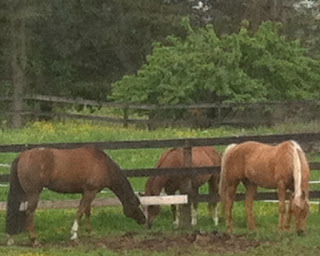 Things have settled down and life is once again peaceful.  Yet changes are in the wind with some of "the guys" heading up to the cabin for the summer.

Who will go and who will stay?