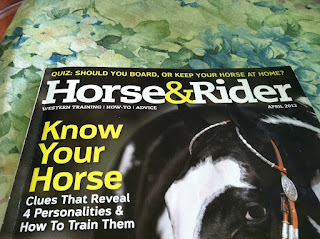 An article in the April issue of Horse and Rider magazine caught my attention.  The article, taken from a book titled, "Know You, Know Your Horse", describes four possible personality combinations which yield four distinct equine types as a result of right or left brain dominant and being introverted or extroverted.

The article gave a brief synopsis of each of the four personality types, what disciplines the horse would usually be good at and training tips.

You would think that while I boarded Elvis that it would have yielded a discovery of who this new guy is.  But the fact is, until I brought him home all I knew of Elvis was in a controlled environment - in his stall, the indoor arena, etc.

I hoped this article would assist me in discovering more about my new boy, who is getting more Appy spots every day.

But, instead of finding more about Elvis I discovered Bob.

I about fell out of my chair when I read the description of The Actor (Right Brain Introvert (RBI)).  A one person horse, reserved, devoted and intense.  Quiet and intense, can be distrustful, fearful and unpredictable.  Needs a quiet, gentle approach by the rider (I learned that the hard way).

There he was on Page 46 in black and white.  I couldn't believe it!  Every word describing The Actor pegged my little brown cow horse.

I got a bit misty eyed as I read about Bob because this article validated how much Bob had been misunderstood.

My trainer had advised me to sell Bob last year when he exhibited all the behaviors noted about The Actor.  I'd struggled with that guidance and decided to not take her advice.  My decision caused some conflict between us which is still there today.

Bob is such a sensitive horse.  It takes all he can give to walk up to a stranger and not run away.  Someone had misinterpreted his behavior and abused him in his past.  He has the scars of a horrible past both mentally and physically.

Getting Bob to trust me had taught me so much.  I'd never encountered such a skittish horse.  I'd had to totally change the way I approached him, how I moved, the tone and volume of my voice.

When I first got Bob I recall yelling at Hank one day because he was into something he shouldn't be as I walked up to Bob.  Poor Bob had taken off in a flurry of fright, thinking I was yelling at him.  It had taken days to make amends.


If I sold Bob there was a chance someone might misunderstand him again and treat him badly.  I would not (and I will not) take the chance of someone misunderstanding Bob again.

The journey with Bob prompted me to respond to this article in Horse & Rider magazine.  I have such passion about this journey.  I wanted to share my story about this little brown pony and the wonderful lessons that he's taught me.

I sure didn't expect anything after that.  So I was surprised when my husband was thumbing through the May issue of Horse and Rider Magazine and turned to me and asked me if I knew Bob and I were in the magazine.

Nope, didn't have a clue.  But there's the letter I wrote, given the honor of Letter of The Month, in May's Horse & Rider Magazine. 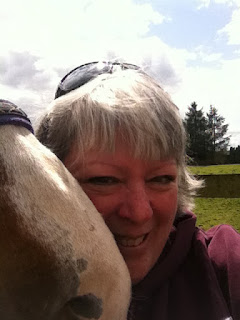