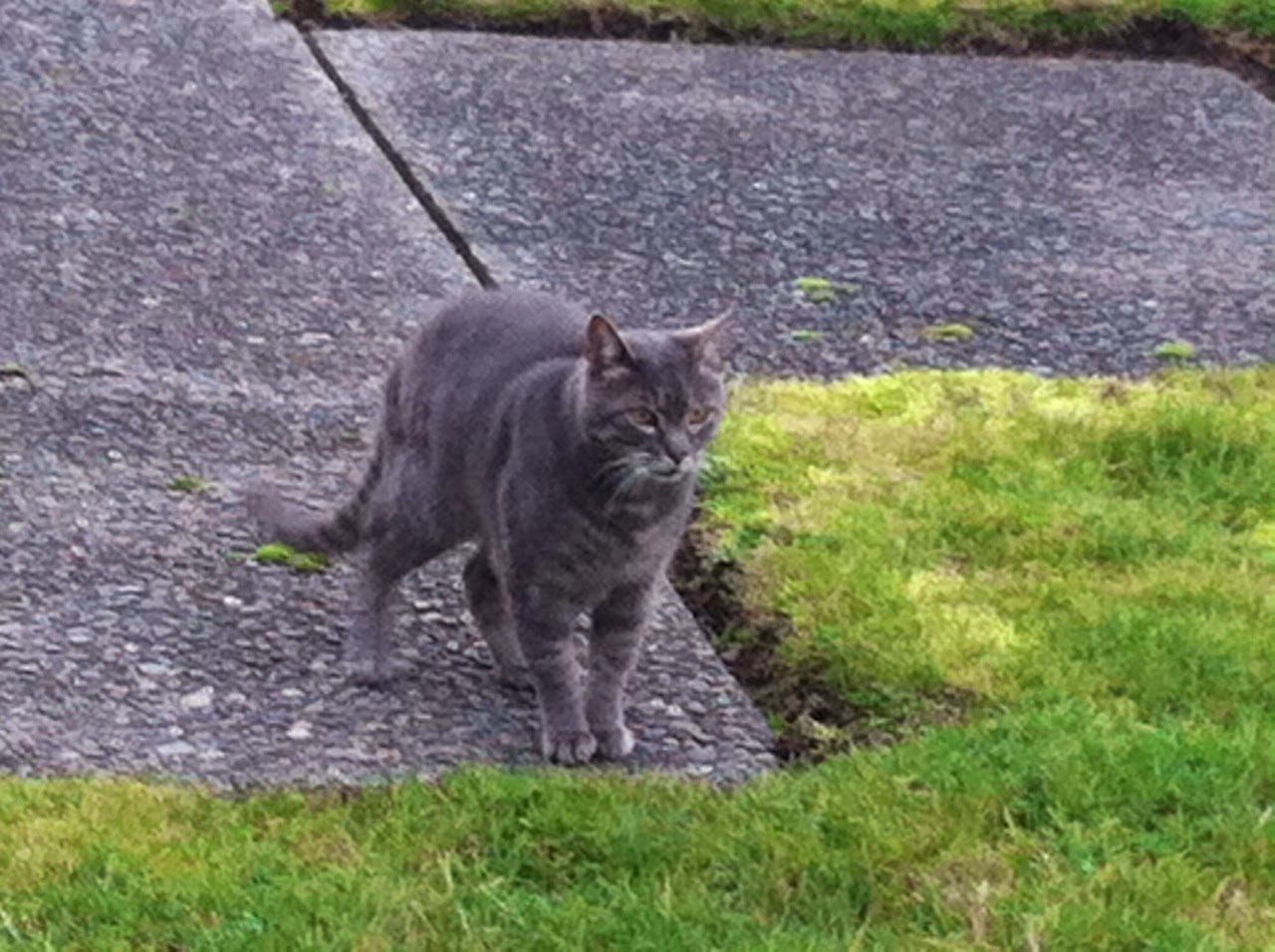 Around the middle of December my husband remarked that he'd been spotting a cat hanging around our place when he went to feed in the mornings.  I didn't spot him, probably because Hank goes out with me at night to feed.  We figured this cat belonged to a neighbor but as the weeks progressed it became apparent that it had moved in.

We decided the new cat would be our "barn" cat.  We told ourselves if it wanted to live here it must fend for itself.  We set it up with a cozy bed in our outbuilding, behind the wood pile where it would be safe, gave it water and that was that. 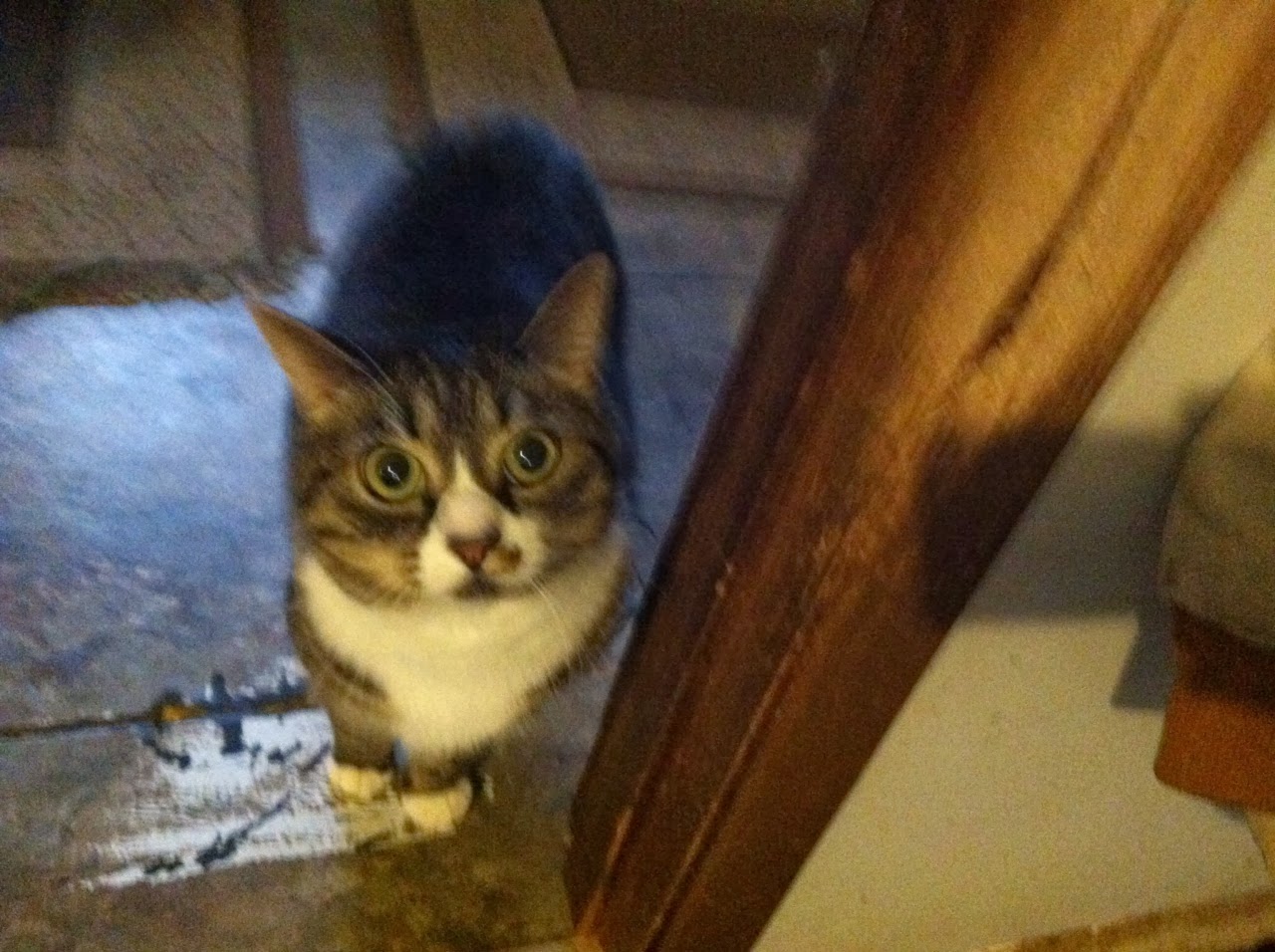 You see, we have a cat, an indoor cat. 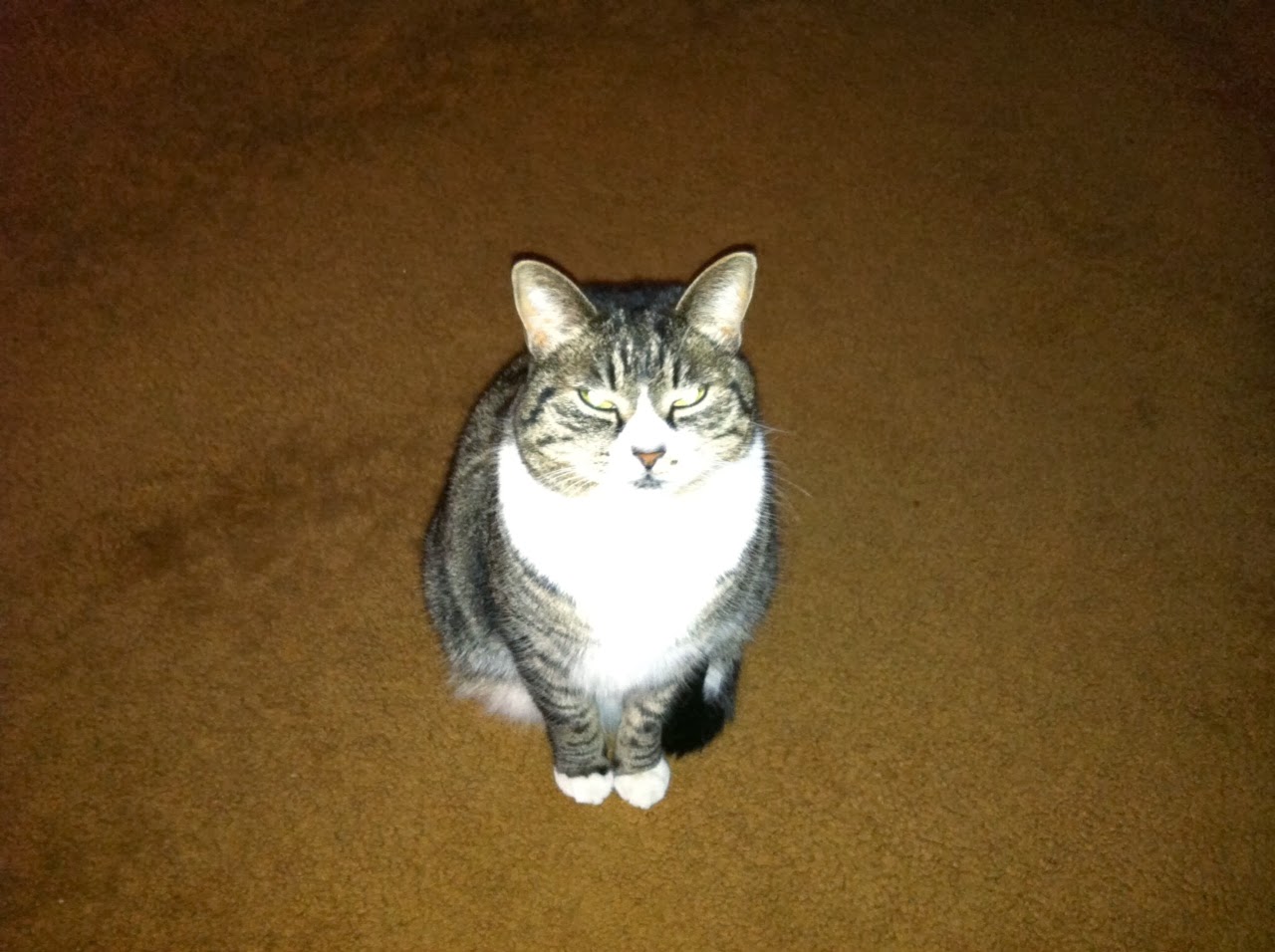 Tuna is a strange cat. 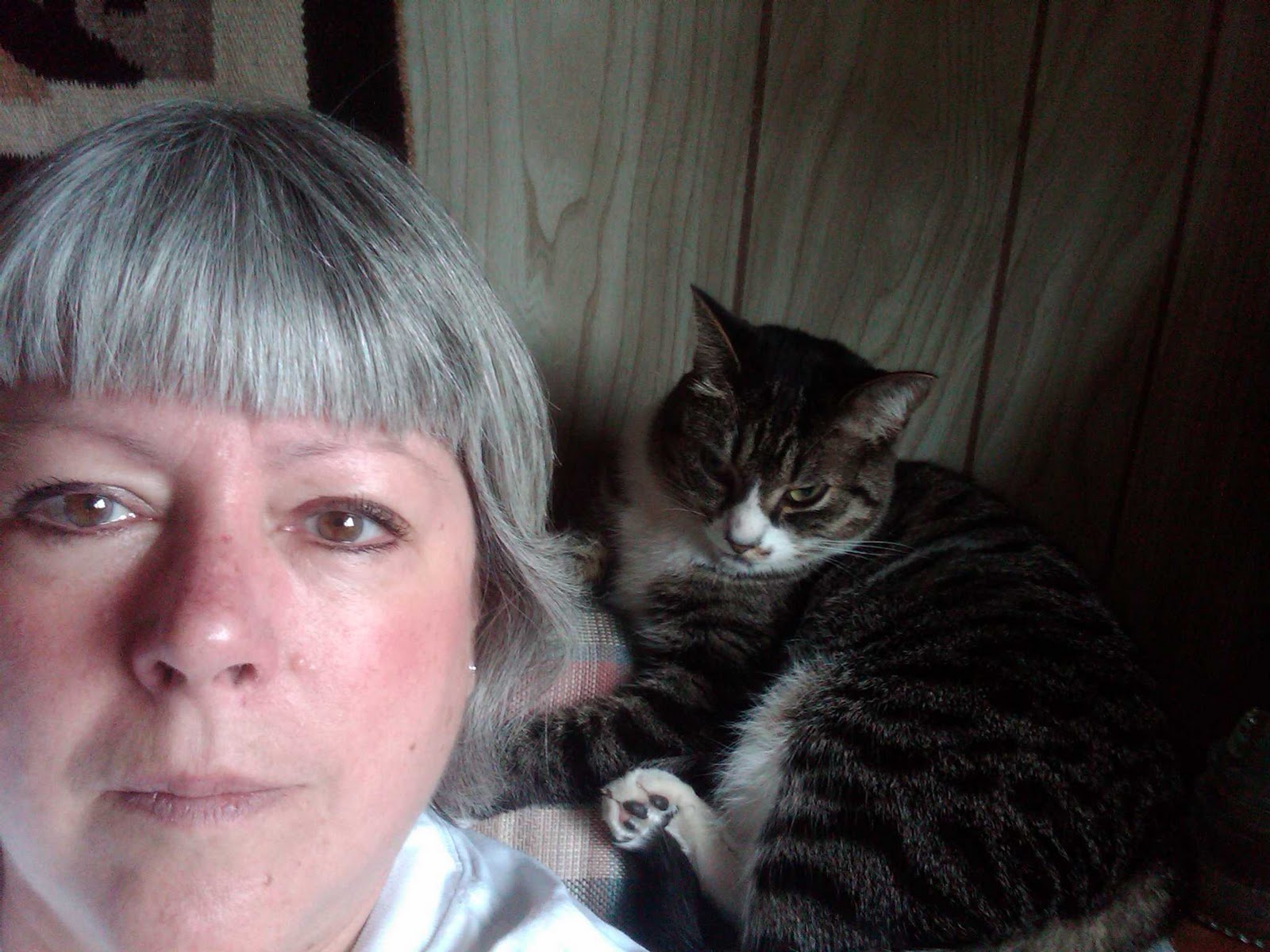 In all these years I am the only human she tolerates, not likes - just tolerates...which frustrates the rest of the family (but makes me feel pretty special).  :) 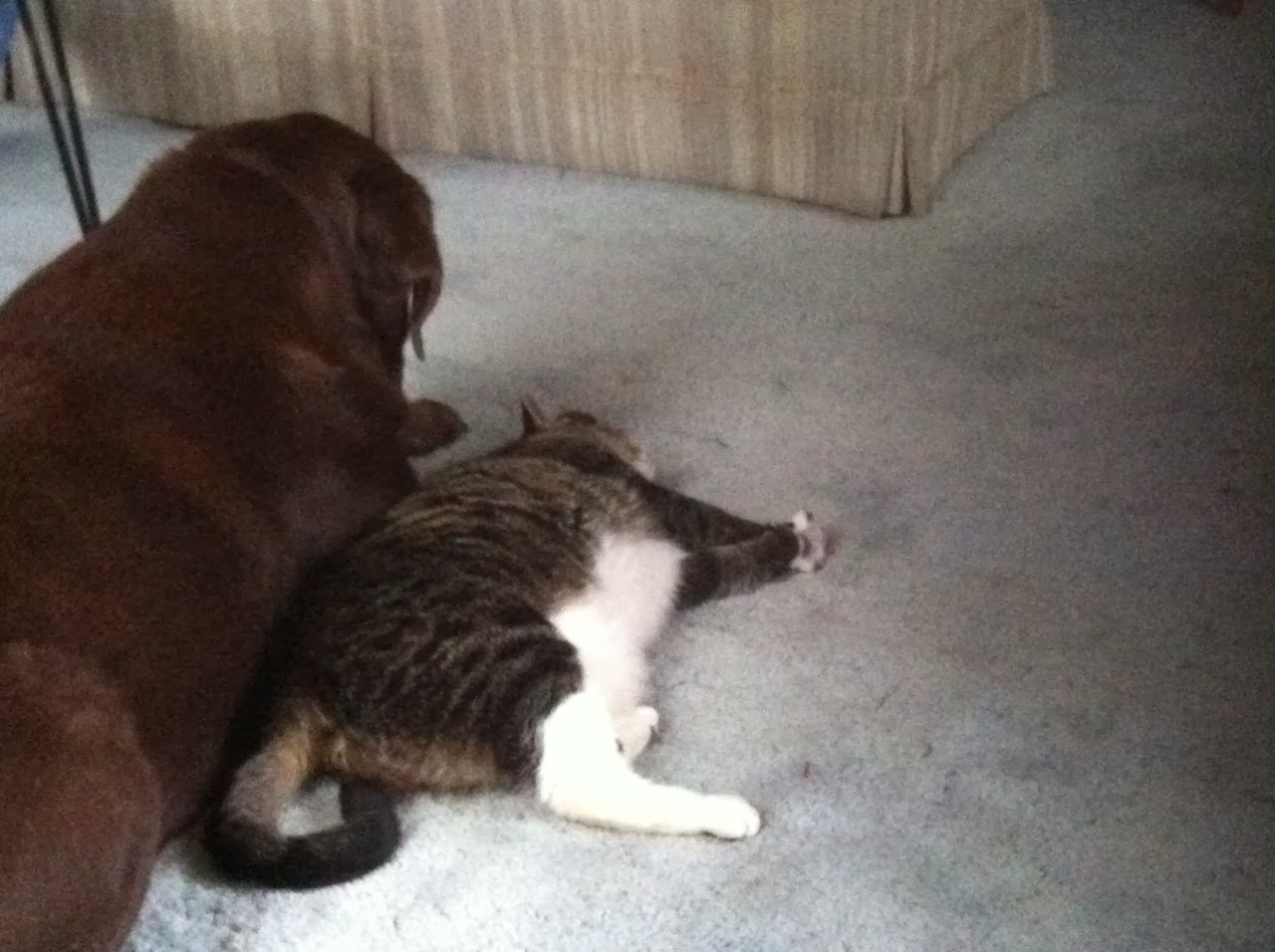 Yet, Tuna has always adored Hank. 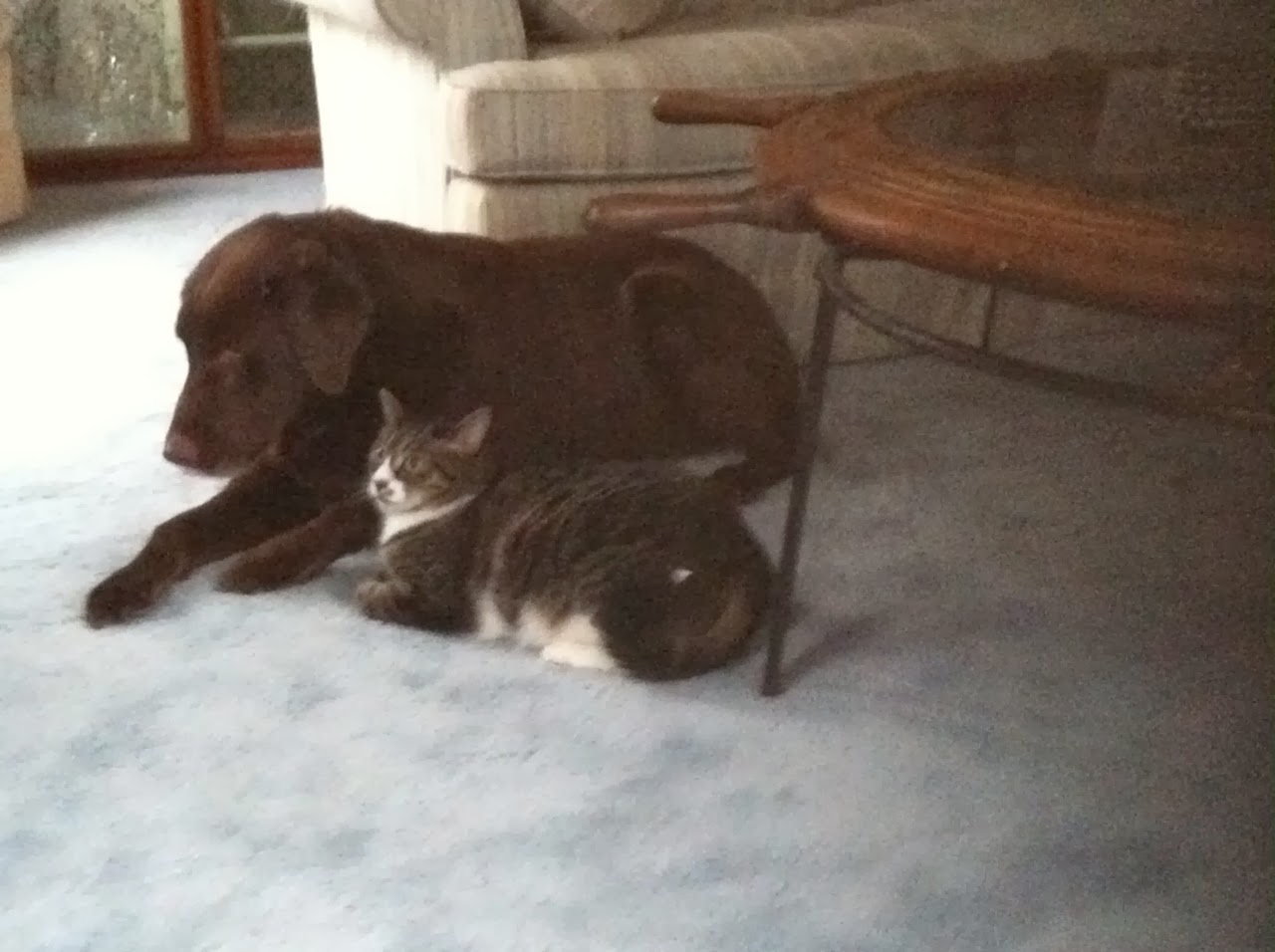 Hank can do no wrong. 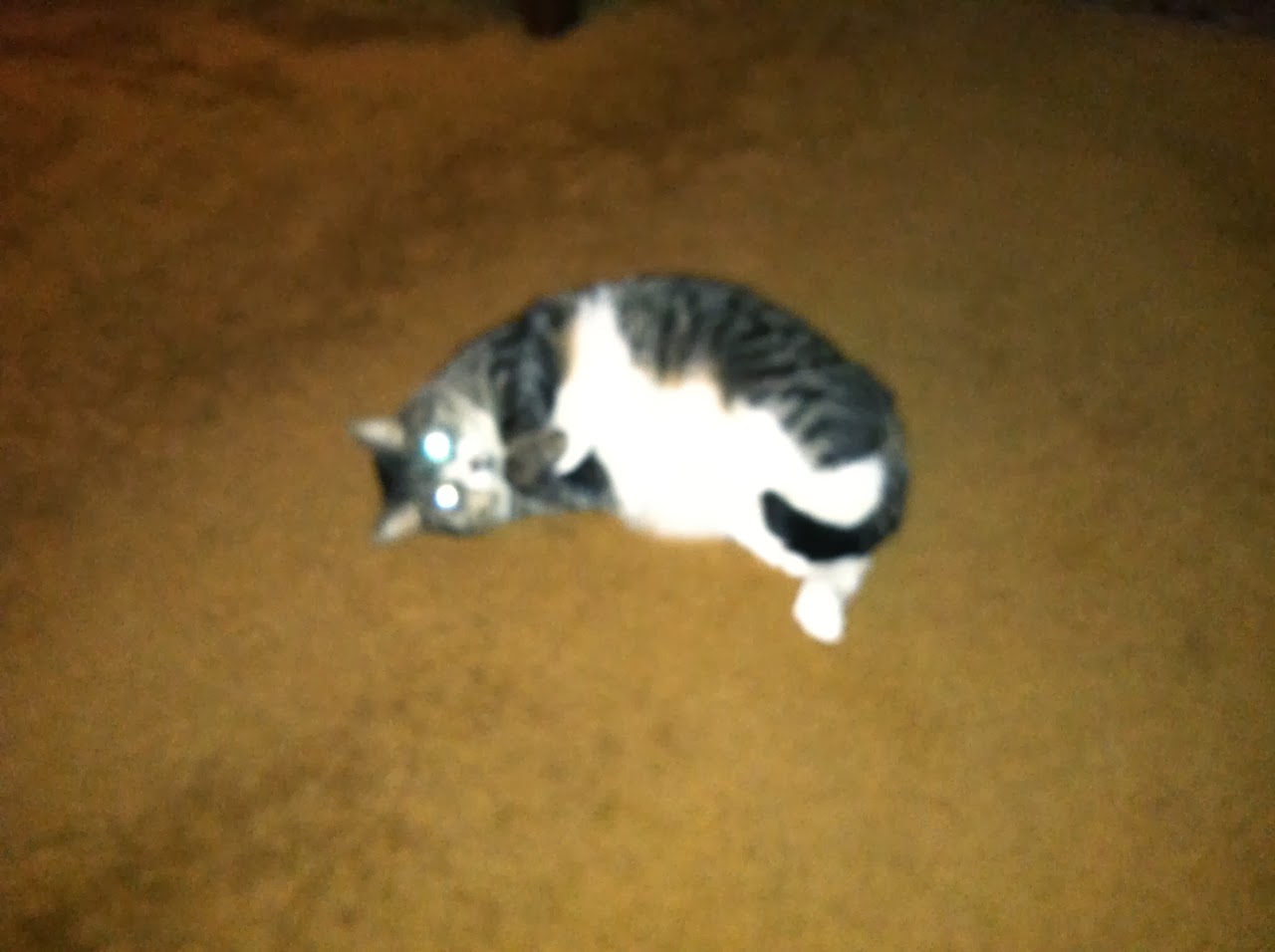 Tuna is not a lady-like cat.  In my opinion, if Tuna was human she'd be a Roller Derby Queen.

As the holiday season started to come to a close, we named the outside cat Hobo.  And then (suckers that we are) we started to feel sorry for it.  After all, it was so sweet and friendly.  We broke down and fed it, telling ourselves that Hobo was now "our" cat.

Only after we fed Hobo did we notice the "botton" on its rear end.  Hobo was a HE and if HE was going to live here, HE was going to need to be fixed.  So off to the Vet we went with "our" new cat, to make HIM an IT. $260 later Hobo came home "fixed", with all the necessary blood test taken and initial shots.  Well gosh, we just couldn't put the poor thing back outside and he seemed so domesticated...so we decided to let him live inside.  As soon as Hobo arrived home Hank parked outside his crate, which I left Hobo in for a few hours to acclimate. 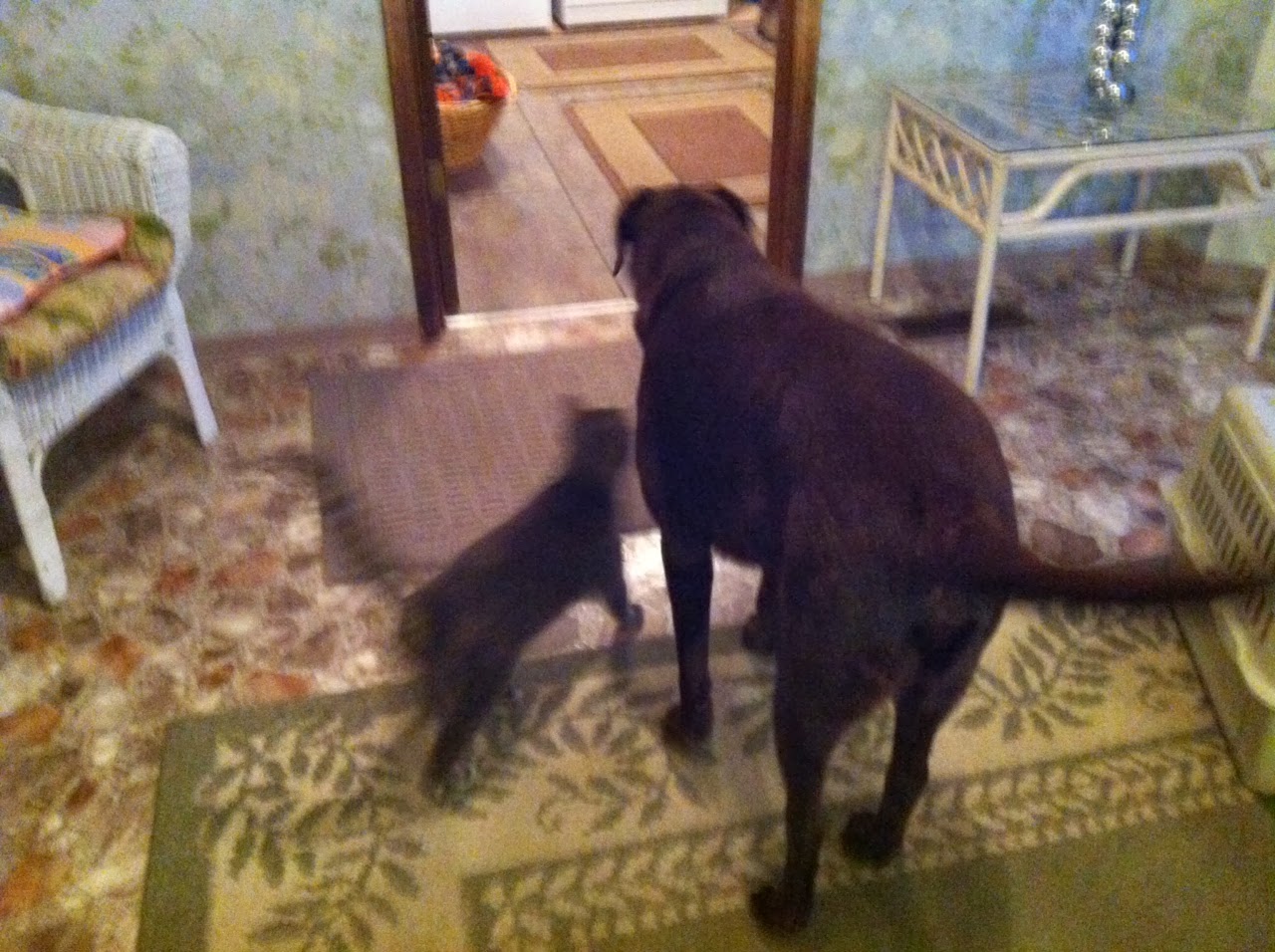 Hank and Hobo quickly became friends and we felt so charitable about our decision. 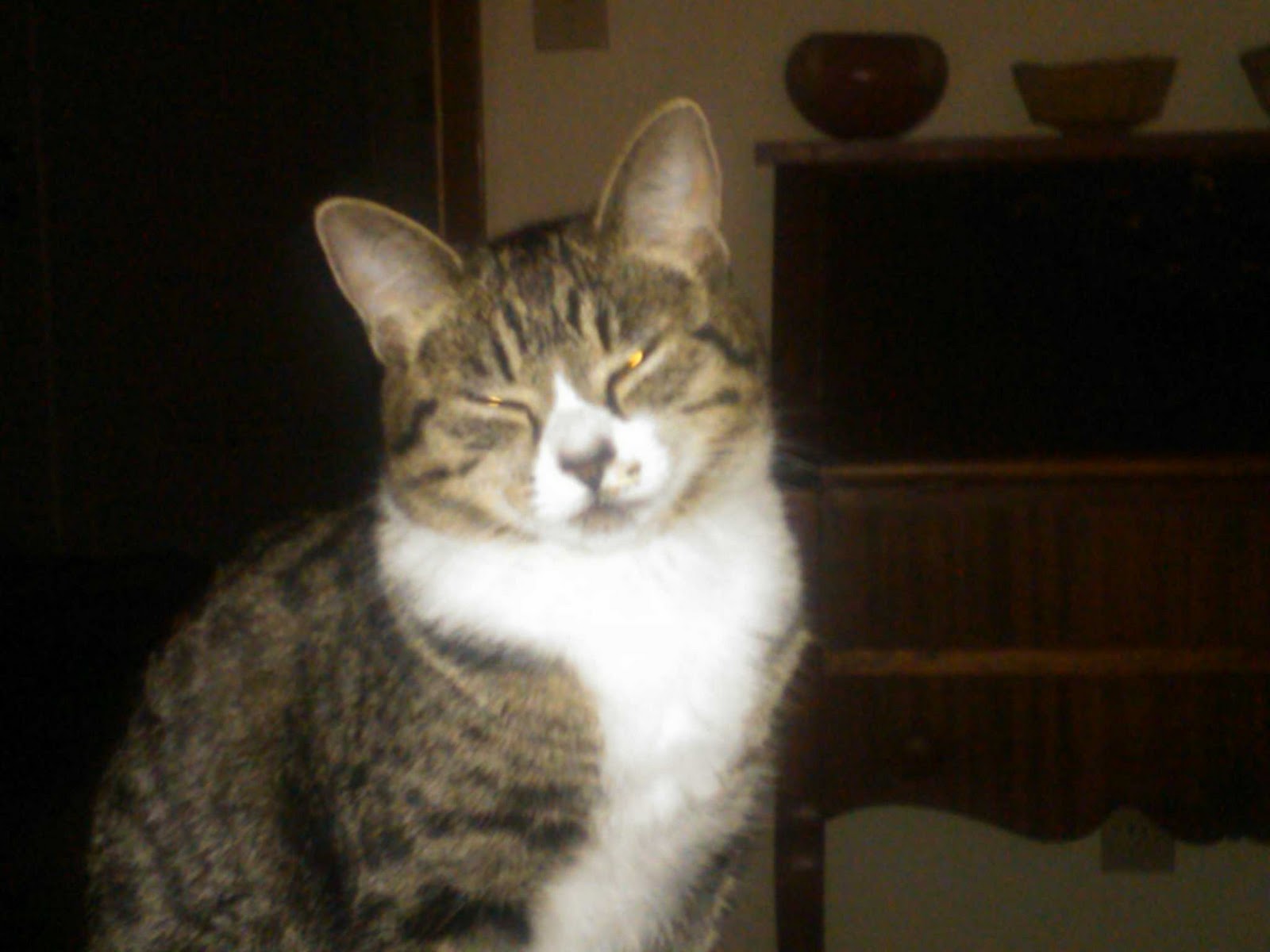 But Tuna had disappeared, nowhere to be found.  In the late evening she appeared, sniffing the recovering Hobo who was sleeping off his surgery.  The sniffing startled Hobo, who jumped up, sending Tuna back into hiding hissing all the way.  The next morning Tuna again appeared and the two met in the utility room.

...and there was such a ruckus - the likes of which I've never heard as the two entered into a horrible cat fight.  Running from the kitchen I yelled at the two felines without any success.  I called on Hank, telling him to break the fight up.  The scuffle flew through the pet door and out into the garage.  I opened the door and sent Hank out after the two to break it up.  Truly, if it wasn't for Hank's assistance I believe the two would have fought to the death. 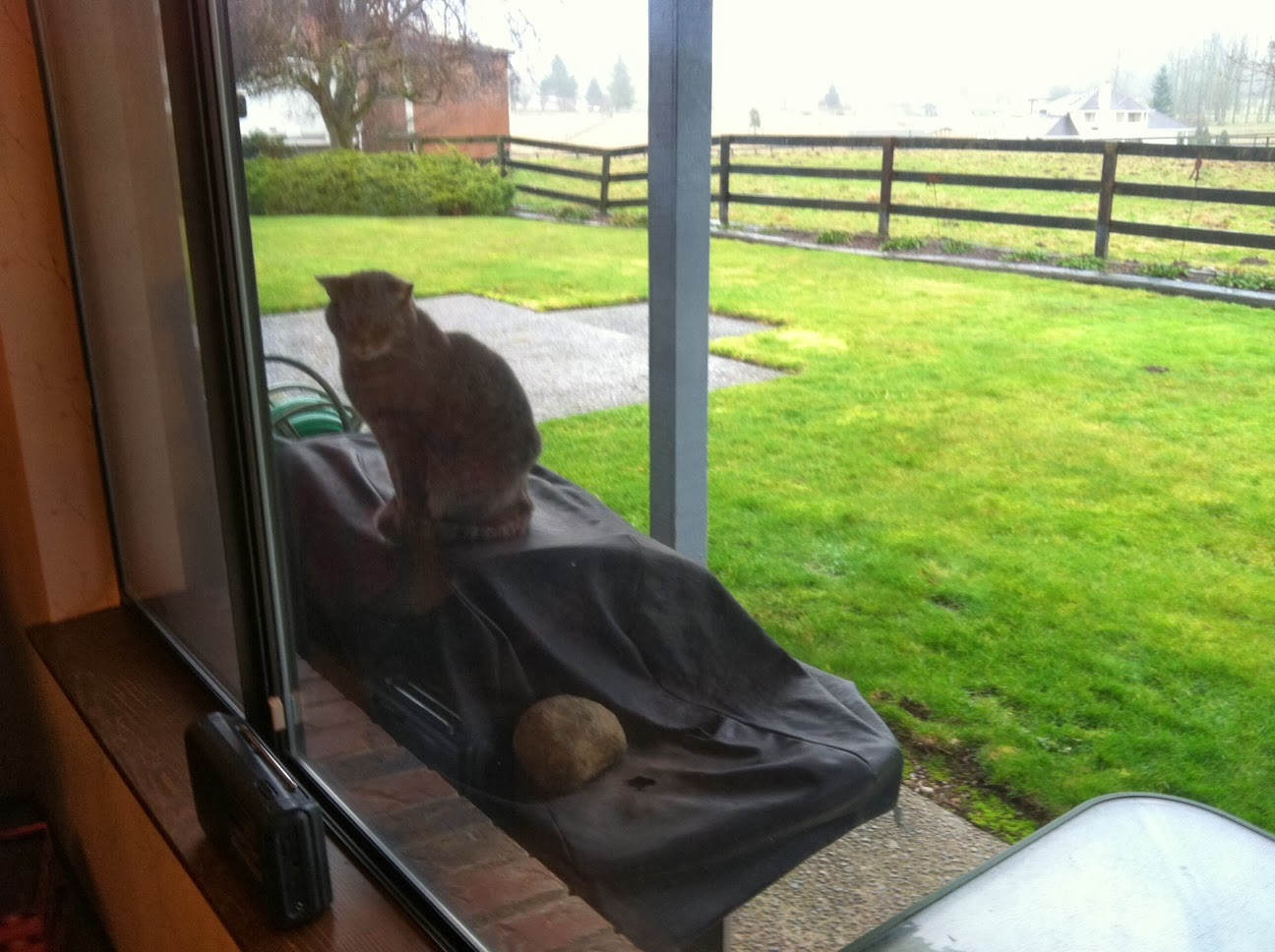 Hobo is back outside and seems happy, showing up in the afternoon around feeding time and following us around the barnyard to be petted. 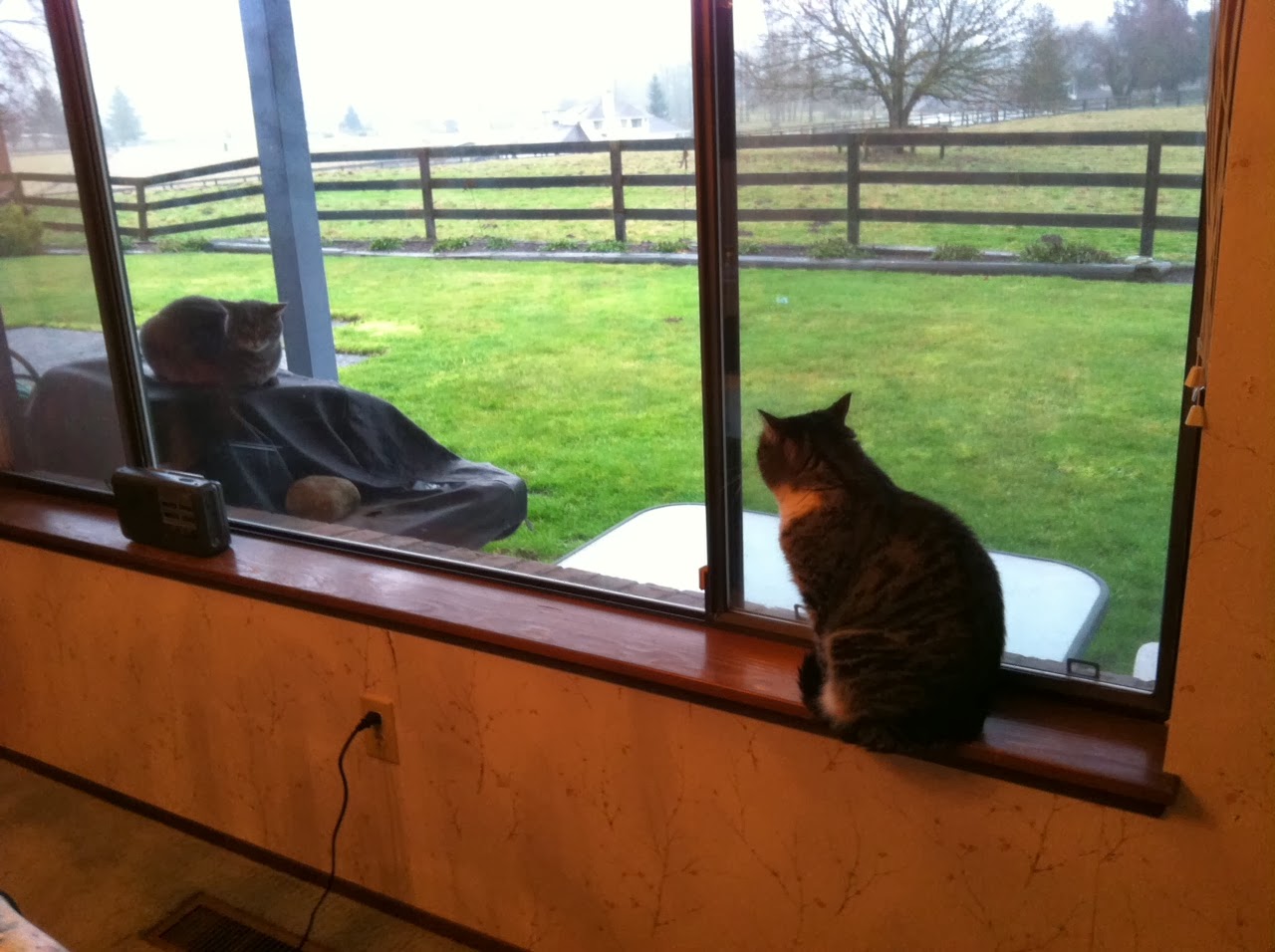 Tuna watches him from inside.  Hobo returns to the vet next week for his booster shots, probably going to cost us another $100.  Pretty fancy barn cat, huh?