I returned to ride Elvis the day after he had his first sorting experience feeling like I'd had a shot of equine adrenaline injected into me.  I spent a lot of that ride working on sorting - turns and fanning Elvis so that we'd be responsive when we worked the gate.  I finished my ride looking forward to our next sorting - April 13th.

I gave Elvis the next day off and returned to ride on Wednesday.  But as I was driving up to the barn I got a call from my Frainer.  She was in the arena working a horse.  Her assistant had brought Elvis in from being turned out and had reported Elvis had a cut on his leg.  My Frainer hadn't had a chance to check the cut out and told me to take a look and advise her.

I was worried as headed to the barn but assured myself that I'd dealt with cuts before and that surely this wouldn't be any different.

But it was.  I arrived to find Elvis in his stall with blood running down his right lower leg.  I took him to the wash rack to rinse his leg but the blood wouldn't stop.  About that time my Frainer arrived, knelt down to take a look and raised her head to look at me, telling me what I already suspected.  "This is an emergency."

Thankfully there was vet in the barn just finishing checking out another horse.  He agreed to treat Elvis on the spot.  It appeared that Elvis had shredded his right fetlock on the wire fencing where he'd been turned out.  The vet stitched and wrapped his leg, leaving directions to change the bandage daily and advising me that Elvis would soon feel like an equine pin cushion after he started receiving his daily injections of antibiotics.  Elvis would also be restricted to his stall until he got his stitches out. 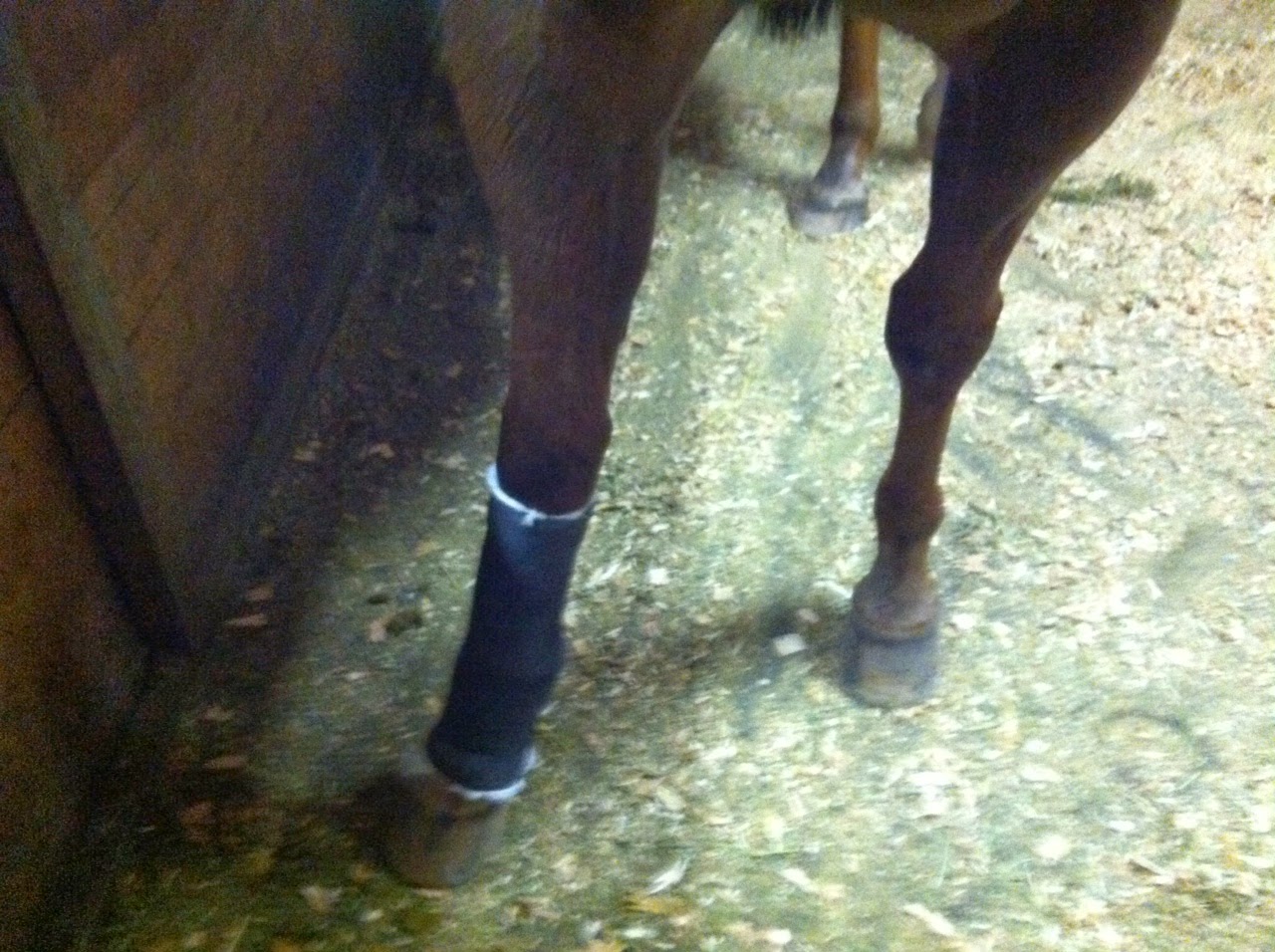 That was thirteen days ago.  Friday was Elvis's last antibiotic injection and he was scheduled to have his stitches removed this coming Tuesday.  The wound had been looking good...until yesterday.  J and I went to change the dressing to find it full of fluid, pus and some of the stitches.

Of course today is Sunday and the vet we used is at a horse show with his children.  But a call was placed this AM and I just received a call back - J and I will meet the vet at the barn in about an hour.

Elvis and I were scheduled to sort cows on April 13th with my Cowgirl Pals.  But that this point I (highly) doubt he will even be off of stall rest.

My high expectations have been dashed like a disappointing rollercoaster ride.  But there is another part of the ride that still gives me a high.  I can't tell you enough about how good a patient my boy is, shots and all.

And after being stall bound for thirteen days?  He's quiet and well behaved in his stall.  So although this is frustrating and scary, at least we aren't dealing with a wild eyed horse while we administer shots and wrap that leg.
Posted by 50+ Horses at 4:33 PM