Getting Along With a Dilemma

It's been a month since we put our elderly Belgian Draft Horse, Bear down.  When Bear left us we moved Gus into the pasture with Bob our Quarter Horse and Poco our Appaloosa. 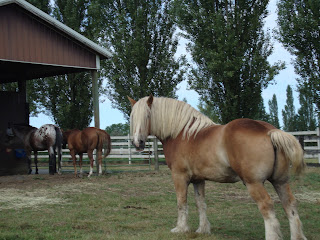 Initially things were a bit rocky as the dynamics of reforming the "herd" took place.  Poco and Gus have shared a pasture before and get along well.  They greeted each other happily but Bob immediately stepped up and pushed Poco away from Gus. 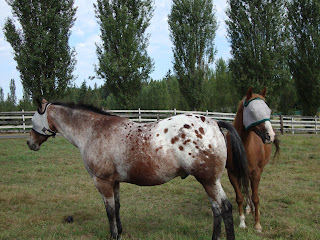 Yep, there was a new Boss in town. 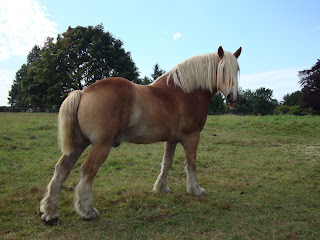 Gus is as gentle and kind as he is big.  He's willing to let Bob, ironically the smallest of all three horses, think he's the boss although Gus could easily change this if he wanted to with one push of his massive frame.

Feeding time has required us to drop hay out in the pasture for Gus while Bob and Poco share the feeder in the loafing shed.  Initially Bob would immediately come over and push Gus off of his hay.  But Gus being the resourceful guy he is, would merely go to the feeder that Bob had just vacated and pick up where he left off with his meal.  All the while Poco paid no mind of who was standing next to him.  Eventually Bob realized that there was nothing special about Gus's hay and now leaves him alone. 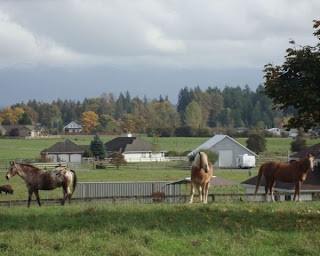 As the last month has progressed things have settled down pretty nicely. Everybody is getting enough food and nobody has gotten hurt.  All three horses now graze and nap together. 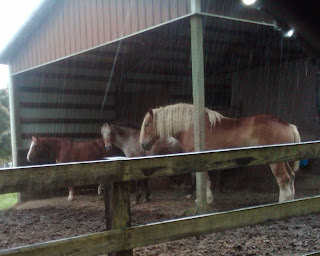 They even share the loafing shed in rain storms. 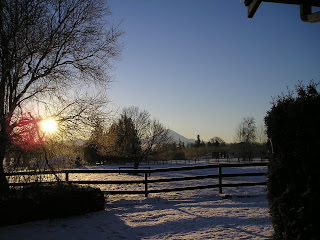 So although things are getting along fine I'm concerned about the upcoming months.  Winter is coming and it brings the strong cold winds out of Canada.  This pasture and its larger loafing shed (where we feed and water out of our outbuilding instead of the barn), are in direct line of these winds which peaked at  +100 mph last winter. 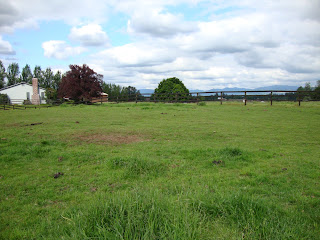 At the end of October we have always moved our horses to the back pastures where we feed and water under the lights of our barn.  The loafing sheds are smaller, fitting two horses well but a bit tight for three, especially for a horse of Gus's size.  These sheds are insulated and provide protection from the winter wind and elements.

There is nothing as comforting as hearing a storm rage outside at night and knowing your horses are dry and safe.  This set up worked great when we had two horses at home and boarded the third.  But this year we have three horses at home.

I'm concerned that someone is going to be left outside in our winter weather.  In addition, I don't want to drop hay outside for the "left out" horse and have it fly away, get soaked (or both).  I want everybody eating in the safety of a dry loafing shed and to have the option of seeking its shelter.

Could be that someone has to live alone but I hate that thought as much as someone standing forlornly outside in the middle of a storm.  This is my current dilemma of which I've found no solution.  Ugh!  I don't have many days left to figure it out!  Stay tuned.
Posted by 50+ Horses at 2:14 PM