The Good News and Kinda Not So Good News... 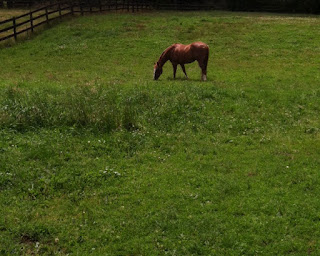 THANK YOU!  All of you who have left comments and have given me such wonderful support during this trying time with Bob.

Many of you sent prayers and they worked!!

As I sent out my last Post, I almost took it down.  The following day I started to notice a difference in Bob - but thought it was my imagination.  Yet as I watched Bob spending more time snoozing in his shavings, it became apparent.  His knees became steady.  In addition, Bob's flighty attitude softened into the funny red horse I fell in love with when I bought him.

I couldn't believe what I was seeing so I waited (and waited and waited), still not sure if those darned knees were going to start shaking again.

But today I left a message for the Vet, reporting what was now a calmer and steady horse.  She returned my call with some good news and some kinda not so good news.

Good news is that all blood tests, including EPM came back negative.

Good news is that it appears Bob wasn't been getting enough "lay down" time in the paddock while off the rich, spring grass.  Although there was an area with hay for him to lie down on, the guy prefers shavings.  He paws, rolls, lays down, snores, sleeps (and pees) on them. 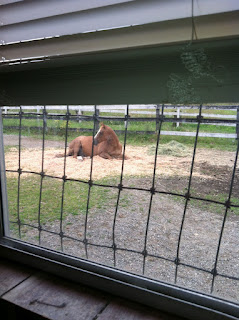 Probably should change his name to Pig Pen.

The kinda not so good news is that the Vet is concerned about arthritis in Bob's knees.  I'm to pull out the Butte again if Bob becomes stiff.  Ugh, that stuff is nasty!  I don't know who gets more on them when I try to dose him (he turns his head up at the powder no matter what I add to it).

I'll be ordering the x-rays to confirm where we are with the arthritis.  In the meantime I'm free to lightly ride my horse once more.


I'm humbled to be given another chance to put my saddle on Bob.  I could care less if all we ever do in the future is walk.  After all the hard luck we've had recently with our horses' maybe, just maybe we are heading the other direction. 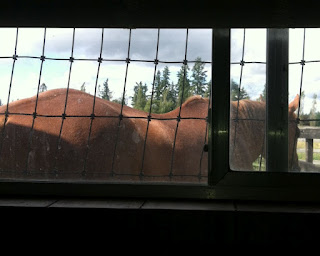 In closing, I will never, ever take the red horse, standing outside my office window as I write this, for granted.  He has my heart...