If Wishes Were Horses 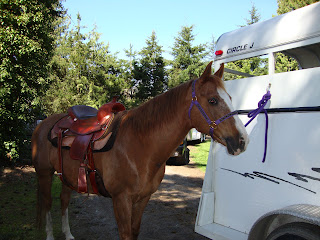 Bob's Vet came out a few days ago.  I specifically wanted her to make this call.  She conducted Bob's Pre-Purchase exam and also came out in December to float Bob's teeth.  She also came out three days later to put Poco down.

Amongst blood, flex and neurological tests it appears the issue is in Bob's knees.  They shake as he stands and I can see him making an effort to keep them locked in place as he grazes.

The Vet noted a change in Bob's ability to stand comfortably from when she'd last seen him in December.  In the past I'd noticed that sometimes his knees shook but never thought of it as an issue and I agree, the shaking has increased and is probably why he has fallen.

Initial blood test has returned negative.  Awaiting the EPM results before we go any further. 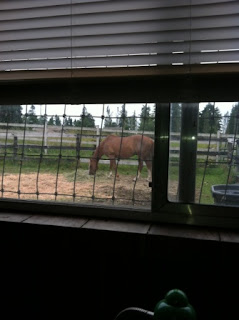 As I write this I can see Bob's knees shaking as he grazes outside my office.  They slide out of their locked position and he has to adjust himself to put them back in place so he doesn't topple over.

I've added shavings to the paddock so that it's more comfortable for Bob to lie down.  My husband and I both note that Bob lays down much more often since we've added them.  It comforts me to know he's comfortable.

It's already driving me nuts to not be able to ride Bob.  It makes me sad to recall the two great riding horses I had last year.  I could always hop on Bob or Poco.  Spins my head to see what a change a year makes.

I've worked so hard to become the rider I always wanted to be while overcoming confidence challenges.  I've struggled so hard for Bob and I to be one team.  I already miss hauling him and seeing his nose sticking out of the trailer in my mirror.

I'll continue taking lessons on a Lesson Horse.  I'm grateful to have a Lesson Horse to ride but it's not the same.  When the lesson is over I have to put him away, I can't linger and ride longer.

Sigh.  If wishes were horses, I'd be riding Bob...