An Update on Bob and Prince 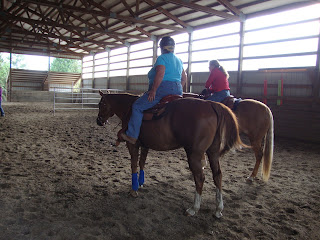 First for Bob, who has been kinda out of the picture since we brought Prince home:

Bob is back to pasture life and doing well.  I'm getting better each time at giving him his Adequan shots.  I'm thinking those that told me to "just do it" vs grabbing some skin first are right.  We had a good Rodeo a few days ago on my shot #2 when I grabbed some skin first and tried to give him the shot.  Apparently Bob remembered my shot #1.

I ended up settling Bob down and then just sticking it in (and feeling bad about that betrayal of trust).  He jumped but not half as much as when I prepped him first.  It was finished in a few seconds and he had a juicy piece of apple in his mouth.  Then a good, long, relaxing grooming session and those blubbering sighs that I love told me all was well and he didn't hold a grudge.

As I recall the issues I've had with Bob's stumbling and shaking knees, I realize that they accelerated the longer I owned him.  I now believe that as time went by and Bob's toes continued to be trimmed longer and heals went lower that the stumbling and shaking increased.  I blame myself for not recognizing this earlier.

Bob's appointment with our new shoer is in early December.  Although I've been advised he can now be ridden, I'm going to wait until that date before I ride.  Currently his toes are still long and I can hear him overstep when he runs in the pasture.  I expect we'd be dealing with more stumbling which concerns me about compromising his legs.  I've spent considerable resources on bringing Bob back and I don't want to take any chances of jeopardizing the work we've done. 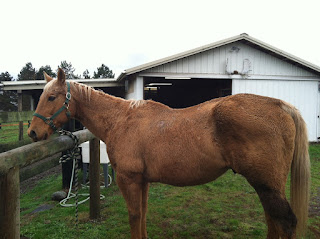 Prince is turning out to be just that, A Prince.  I admit to not being well versed at dealing with a horse in this condition.  I initially gave him access to some Senior Feed and the consequence was very loose poops.  I backed off of all food but grass hay and grazing, along with plenty of fresh/clean water and after a few days his digestive system straightened out.  I then wormed him with a "general wormer" which was recommended by my feed store for a horse in this condition.  All is well now.

We've had Prince for six days and believe we can already see him starting to fill out.  The dull look in his eye that matched his demeanor is now replaced with a bright eye and inquisitive personality.  (He has the most gorgeous golden eyes!)

Last night our (new) shoer trimmed up his feet and put on shoes.  Prince was quiet and cooperative, willingly picking up each foot.  Our shoer recommended that we feed him some alfalfa pellets to increase his weight and give him additional nutrients.  I will stop by the feed store and discuss with them after I finish this Post.

My feed store has become a good resource for Prince.  He has a new comfy blanket for the winter chill that starts tonight.  I usually don't blanket my horses but considering that he's underweight I know I need to.  However, the bite on his side where the stallion bit him is nasty.  I've been cleaning it and putting Neosporin on it (something I've used in the past) and it's looking better but still raw.  I think open air is important for it so I'm concerned about putting the blanket over it.  That being said, with temps dropping into the 20's tonight, the blanket must go on.

I've decided to take a picture of Prince around the first of each month so that we can chart his way to being the strong, beautiful horse he once was.  He is exactly what I was looking for!  His quiet mind, good manners and friendly ways with both horses and humans are wonderful.  His background both as a lesson horse and on trails will be a real plus when the day comes to ride him.

That's gonna be a great day!