Shutting it Down for Winter 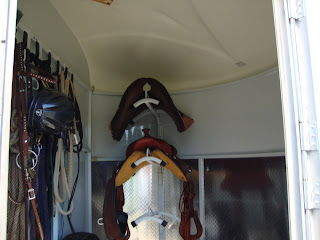 I've lost count of how many times I loaded up my trailer this spring, summer and fall.  I had a routine.  I'd load up my tack first thing in the morning, when I was out for my morning walk with Hank The Dog.  Hank and I would then head in for my morning cup of coffee.  Sometimes it was already so hot outside that I'd find myself covered with sweat when I came back into the house.  On those mornings my ritual of a morning cup of coffee didn't appeal much to me. 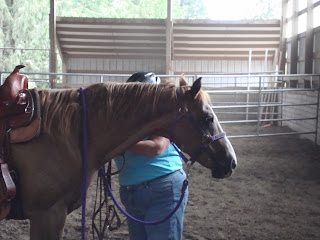 I learned to give myself plenty to time to get to where I was going.  I bought Bob in late May with only a one week tryout.  I didn't know much about his personality.  I found that one good way to get to know your horse is to haul him places and that the more you haul together the better your relationship gets.  I found Bob to be "sensitive" but was pleased to also find him to be "adaptable".  Bob is the kind of horse that once he checks something out, doesn't question it any further. 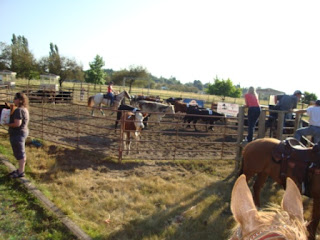 I took this picture on Bob.  This was my favorite trip of the summer.  We'd gone to a local cattle sorting event solo, totally on our own for the first time.  It was a liberating experience and one of the highlights of the summer.  And oh those warm evenings....

But all things must come to an end.

Last week some friends invited me to join them one morning to practice sorting cows.  I didn't even think twice before I agreed to not only go but to also pick up a Cowgirl Pal and her horse along the way.  I told my Cowgirl Pal that I'd meet her at her barn early so we'd get to the practice with time to spare. 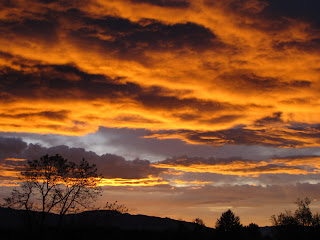 Home alone because it was hunting season, I caught the weather forecast as I was heading to bed.  They talked of lows in the 20's, fog and icy road.  Oh no!  I tossed and turned all night, worried about driving my one ton dually and hauling horses on icy roads with unforgiving 8 foot drainage ditches to greet us should we slide. 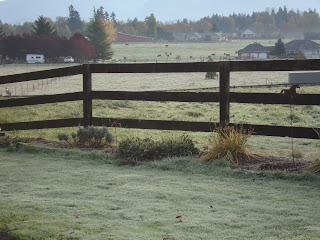 I awoke to find everything frozen. 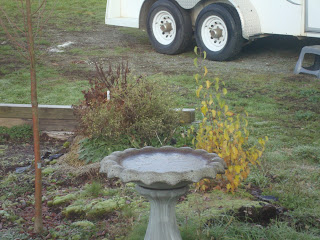 The bird bath was frozen. 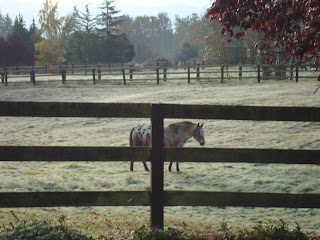 Poco was frozen (actually he wasn't but he looked that way). 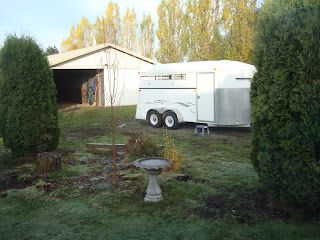 I followed my routine of loading my tack ahead of time but couldn't get the trailer door opened because the trailer and truck were both covered in ice.  I returned to the house to wrap my chilled hands around my very appealing morning cup of coffee.  After I finished my coffee I went back out and finally got the door opened. 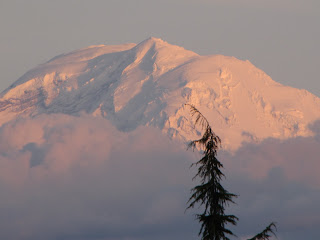 I drove on the ice as if I was driving on glass, telling myself to try to not hurry because I was running late.  I told myself to keep it low and slow.  My Cowgirl Pal (bless her heart) was waiting with her horse in hand.  We were loaded and on our way within minutes.  We got to the practice and hurried to unload our horses.

I wasn't even finished saddling up Bob and they were calling my name to take my first run.  I was stressed from the drive and poor Bob was riding right along on my emotions.  Minutes later without any of our preliminary ground work, Bob and I were moving our first cows.

Bob was so tense I felt like I was sitting on a board.  I had this sinking feeling we were a recipe for disaster.  When Bob spooked, sprinting sideways all the way across the pen, I almost fell off but at the last minute regained my balance.  Quite a crowd had gathered to watch the proceedings.  I recall thinking as we flew along sideways that I'd be darned if I was going to fall off in front of them.

The old me would have called it a day and gotten off.  The new me carried on - a testament to how much my confidence has grown this year.  Eventually as I kept riding things got better.

My Cowgirl Pal and I were both chilled by the time we finished.  We were off our horses after shaking our legs out to get the circulation back, loaded up and on our way home minutes later.  With the sun now up and the roads clear, it was an uneventful drive back home.

But I knew as I pulled into our barnyard that I was finished hauling for the year.  As I write this it's sleeting outside.  Snow is predicted tonight.  It's time to shut it down for the winter.  I'm sad to see it end but I'm left with great memories of the times I've had and wonderful people I met.  You can bet Bob and I will be back on the road next spring.
Posted by 50+ Horses at 2:54 PM