"My" shoer, Rich Nelson, the most knowledgeable, professional and kindest guy in the world came out on Friday afternoon to remove Bob's wedges.

As Rich worked I told him I hoped the wedges had been the cause of Bob's falling and that maybe removing them would fix whatever was wrong.

Rich has my number. He knew what I was thinking - which was that I'd ride Bob when the wedges were off to see if it made a difference.

But while Rich was removing the wedges we could see Bob's knees shaking. As I stood on Bob's side, Rich looked up and gave me that serious-in-your-eyes-look.  In a gentle voice he said, "You need to call the Vet.  The level of these wedges aren't enough to cause Bob to drop to his knees.  Under no circumstances should you ride this horse until you figure out what's wrong."

Since Friday I've agonized over what might be wrong.  The Vet's office opens tomorrow morning and I'll be calling to schedule an appointment. 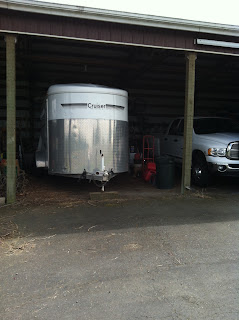 Today we put the trailer away.  The action speaks for itself.