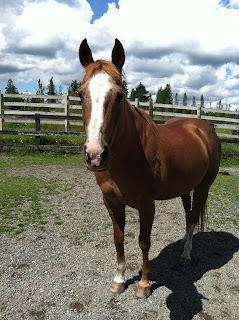 I've owned Bob for a little over a year now. 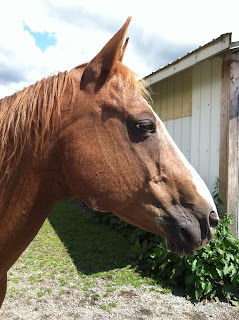 We've sure had our challenges, I even had him up for sale for about twelve hours before I realized that everything I had written in the add was exactly what I wanted in a horse.  I asked myself what in the heck I was doing and pulled the add down.

It scared me that I would sell what I've always wanted.  I stepped up to the plate and committed to work through our issues.  Since then Bob and I've been riding often.  I've been hauling him up to the barn where I used to board.  We meet up with my best riding Pal and her horse and the four of us have lots of fun.

But ever since I've owned Bob he has had a habit of tripping.  It initially wasn't a big deal - a little trip here and there.  I mentioned it at the pre-purchase exam and although I didn't get x-rays, the vet thought everything seemed fine with the flex test, etc.

Recently Bob has been tripping more often.  A few weeks ago I shared my observation with my shoer when he was here.  He suggested we place wedges on Bob's front feet.  He termed Bob as a "broken backed horse" which from what I understand is related to his confirmation and how his front feet are tipped back too far.

We placed the wedges on Bob's feet and my shoer told me to call him if there were any issues.

An odd thing happened during that shoeing.  Bob's front feet suddenly collapsed.  Tools and the shoer went flying.  I was off to the side lightly holding the lead rope and I could tell by the look on Bob's face that he hadn't anticipated going down.

My shoer commented that Bob, who is always the quiet/perfect guy when being shod, must have fallen to sleep.  We continued with the shoeing with no further issues.

This week during our weekly lesson Bob had passed the trip stage and we had stumbled pretty hard.  My trainer and I had commented on the stumble and agreed the wedges weren't making any difference.  I mentioned I'd be calling my shoer as he had advised.

A little later, while Bob and I were trotting, Bob had suddenly dropped to his knees.  I didn't even think about my reaction until later...as we were going down and the reins were stripped from my hands, I had stuck my legs out straight in front of me and leaned as far back as I possibly could.  I stayed in the saddle and Bob immediately got back up.

My trainer commented on the "stumble" and told me to keep riding.  In retrospect I should have stopped right then and there but I knew if I did that I'd carry the baggage of the experience with me, think about it later and that it would hurt my confidence.  So I slowed to a walk and stayed on.

As I led Bob to the trailer after our lesson, we stopped at a little puddle so he could have a drink of water.  It was a little shallow puddle, compliments of all the rain we've had, off the beaten path of cars and the road.  While Bob drank I lightly held the lead rope.

Suddenly Bob's front legs collapsed again and he fell head first into the puddle.  It again surprised both of us.  He got back up and I could see he'd cut his leg on a rock.  We slowly walked to the trailer and I drove the short distance home as if I had soft shelled eggs in my trailer - so worried Bob might fall.

At home I nursed Bob's cut and called my shoer to come out and remove the wedges.  My thought is that the higher angle of the wedges are causing Bob's knees to go out.  In the meantime Bob is walking fine here at home.

Before I call the vet out I want to see if removing the wedges alleviates the issue.  Maybe that's a copout.  But I'm just too terrified to hear what the vet might tell me - we've had so much heartache this last year with our horses.

So for the next few days I just want to live with what I hope is.  And not with what might be. 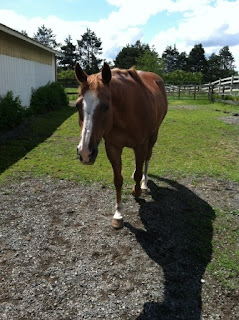