Last week my daughter and I were having morning coffee when we heard a helicopter fly over our house.  It wouldn't have been an unusual event except that I could tell from the sound that it was flying pretty low to the house.

I remarked that there must be an accident on the two-lane highway which is a few miles from our house.  The road is known for horrible accidents which sometimes require a Lifeflight helicopter and bring in various helicopters from news media that fly over our house in their circle as they report the event.

I could hear the chopper flying over our house.  Multiple times.  The sound got louder and louder until our house was shaking.  The china in the cabinet behind me was rattling.  The floor was vibrating.

We sat there for a few minutes while everything shook until I'd had enough.  I headed outside to see what in the heck was going on.

I walked out the door to be met with a large drab green helicopter circling right above our house and front pasture.  It was so close that I could make out the pilot wearing sunglasses.

As I stood there the helicopter circled about five more times over our house and then dropped down in the neighbor's pasture right along our fence line, not more than 75 feet away, hovering about 3 feet above the ground. 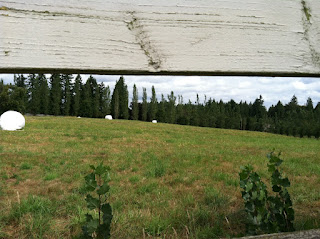 I found myself standing in a rather irritated position with my arms folded across my chest.  Surely if I could see them, they could see me.  And if they could see me, they would be blind to not notice my stance.

I was not pleased.

They continued to hover right above the ground as if they were taunting me.  Obviously my position wasn't sinking in.  I looked for a tail number or some type of identification.  But there was no ID I could spot on the aircraft.

Suddenly the chopper lifted back up and quickly flew off to the north, disappearing on the horizon.  Shaking my head, I returned into the house.

Yesterday I was working in my office out in the barn when I heard a helicopter approaching.  It sounded like it was flying low to the ground.  Once again I could tell it was flying around our house so low that the window in my office started rattling.

"Oh no!  It couldn't be THEM again could it?" I headed out of my office to take a look.

The Big Green Bird was back.

Round and round it flew over our house and barn so low that their circle wasn't very wide.  I could once again see the sunglasses of the pilot.  I made myself a little taller and returned to my "I'm not pleased" position.

Multiple times they passed above my head.  I looked over to see what Bob thought of all the racket.  He could care less, standing in his loafing shed eating hay.  Once I saw that he could care less I relaxed my stance and just stood there watching.  I again looked for any identification and confirmed that there was no ID that I could spot.

Eventually, I gave them a little wave and shrug of my shoulders in resignation and just stood there helplessly watching them go round and round.  A few more circles and once again, as quickly as they arrived they left.

I'd sure like to know who is flying that Big Green Bird and why they keep picking on our place?

So, bring it on Big Green Bird!  Because next time you pay me a visit I'm grabbing my camera.  Maybe I'll also turn on the hose and spray you.