A Prep for the Big Day with Bob 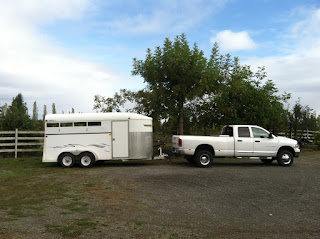 I write this in a hurry.  It's late and I need to be up early tomorrow so I can be at the barn to meet the Vet.  Today I hooked the trailer up and hauled Bob up to the barn where I've boarded in the past.  I call it "The Spa".  Bob will be spending the next six days at The Spa.

Have you ever visited a Doctor's office and after leaving found that you'd received so much information that you felt you couldn't quite grasp all of it?  That's how I felt last week when the Vet came out to pursue what's going on with Bob's legs.  There was so much information coming at me that I (still) feel overwhelmed and frankly I'm not sure if I was to write about all of it that I'd be correct in what I said.

So please forgive me if I don't recount all of what the Vet told me last week because even today it's still either garble or settling in.  I will try to get more clarification tomorrow.

What I can tell you is that the x-rays reflected wear on Bob's knees but the surprising find was that Bob's toes were way too long and his coffin bones were growing straight out instead of pointing downward at an angle.  The Vet wanted his toes trimmed and pads put on Bob's front feet because he is back at the heal (she called it Broken Backed).

The Shoer came out the following day and adjusted Bob's feet.  I love my Shoer, have had him for years so I had to gulp when he told me he was not willing to reduce the toe as much as the Vet had recommended.  I decided to not argue since I'd be seeing the Vet tomorrow and she could give me feedback as to whether the reduction was adequate or not.

Bob was clumsy on his new front feet but adjusted in a few days.  However, on Friday night I found Bob missing his front left shoe/and pad.  I called the Shoer Saturday morning but he couldn't get out until today (Tuesday) to put a new shoe/pad on.  He told me that Bob will need Bell Boots so he doesn't pull the shoes off (he forgot to tell me about that).

I've stepped into it now and my antennas run high.  I'm concerned that Bob's been limping around without that shoe/pad for five days and what impact that will have on his left coffin bone.  Will the right now be different?  Will find out tomorrow if that's an issue.

Tomorrow Bob is having "goop" injected into his knees.  I call it "goop" because as I write above, I'm not exactly sure what is being injected.  Its hand written on my med sheet from last week but it's all in medical jargon and hard to read the hand writing.  But I'm sure it's good "goop" cuz it sure costs enough!  :)

Bob will stay at the barn until Sunday on stall rest.  He will come home on Sunday to be turned out in his old friend, the paddock where he spent his spring when the grass was too hot in the pastures.  A week later he will be turned back out into the pastures and the Vet will be back out for a re-check on how things are going.

That re-check will decide where we go from there.  The Vet assures me that Bob will be able to be ridden, but I'm going to hold my excitement until I see how this all goes.  I've been down this road before (and we fell). 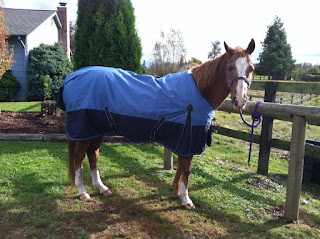 Here's Bob in his new blanket, ready to go to the Spa.  Once again, I'm thinking he looks sad...but maybe he was picking up on my vibes.  Because tonight my pastures are empty and they are meant to have horses on them.  Tonight I miss Bob.