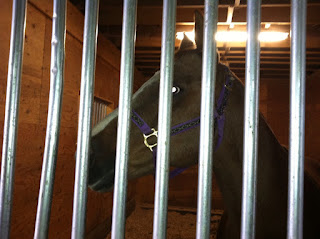 I arrived at the barn early yesterday morning for Bob's big day.  On this day Bob would be getting injections in his knees amongst other things.  I snapped this picture before the Vet arrived.

Regarding Bob's unstable knees.  I downloaded the Call Sheet in my email from last week to try to explain what's going on with them.  It says he has "effusion in both intercarpal joints.  He is 1/5 LF 1/5 RF flexions positive to carpal flexion L/R.  Radiographs reveal mild joint space" (and other stuff but I can't read the handwriting).  The Vet had told me that the injections should resolve the unstable knees.

As a result of the radiographs, the Vet had told me that Bob's toes were too long and needed to be cut severely back.  I had my Shoer out the day after the Vet visited.  I showed him the x-rays and the copy of the email the Vet had sent to me for him saying, " Bob needs his breakover to be reduced significantly by shortening the toe length and have a 2-3 degree wedge to correct his coffin/pastern bone axis".

I had been surprised when my Shoer told me he would not bring the toes back as far as the Vet had requested.  I asked him if it was because it was too much hoof to cut off at one time and he said that wasn't the case.  He told me the toes don't need to be that short and that this is "just how Bob is built".  End of conversation.

When the Vet arrived yesterday the first thing she wanted to see was Bob's feet.  I explained what happened when I shared her information with my Shoer.  The Vet looked at Bob's fronts and told me that his toes were still way too long.  She pointed out Bob's backs and observed that they look like they hadn't even been trimmed.  And she's right, they do look like they haven't been trimmed and are noticeably longer than his front toes.

She was disappointed that the Shoer didn't acknowledge her notes and team with her on resolving Bob's issues.  A conversation about future shoeing and who to use followed.

We moved Bob to the wash rack and he was sedated.  He received injections in both of his knees, a different issue than his stumbling from long feet.

When we moved a groggy Bob back to his stall so that he could have his teeth floated it became obvious how long his toes were.  He drug all four feet behind him with each step.  Yes, he was sedated but dragging those toes behind him as he did truly reflected how long they still are and how much effort he makes to pick up his feet when he isn't sedated.  Seeing him drag those toes really hit me hard and I felt horrible.

Bob proceeded to have his teeth floated and some beans removed.  He got his first injection of Adequan with the Vet showing me how to give his future shot.  (I'm sure by the time I finish all seven vials of Adequan that I'll be a pro.)  And with that we left him to sleep off his sedation.

I will hand walk Bob the next five days.  On Sunday Bob will come home and I can let him out in the paddock for a week before turning him back out in the pastures.  I'm addressing the Shoer issue because Bob still needs his feet trimmed back further as soon as possible.

On November 19th the Vet returns and we will see if all of our efforts helped.  In the meantime I will keep you posted.  Thank you all for your support and kind responses to my Posts.  And Dancing Donkey...thank you so much for your observation because what you wrote is exactly what my Vet told me!