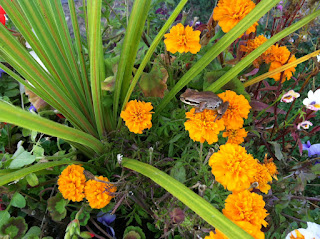 It's been a long (dry) summer.  The days have been gorgeous but after 4 months without rain we're ready for a change.  Even though we've had some frosty days I've continued to water my summer plants.  I found this little guy in the flower pot on the table outside our barn.  He's been hanging out there for about a month now.  I named him Alvin. 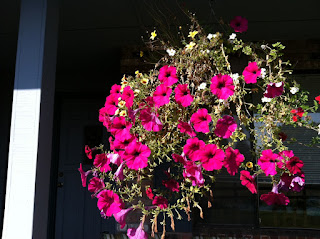 My hanging basket has continued to bloom although the hummingbirds no longer visit. 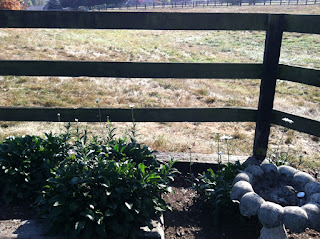 The daisies have started to come up (for a second time). 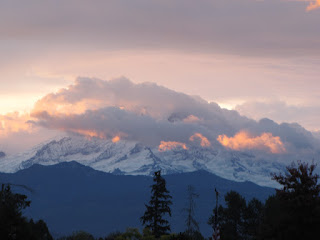 For the past four days every weather report in our area has predicted rain tonight.  Sure enough today there are clouds we haven't seen for months forming on the horizon.   I've taken advantage of the countdown of stormy weather. 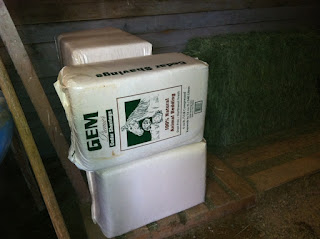 I've started stock piling shavings. Always good to have on hand through the winter since many of the feed stores run short around February. 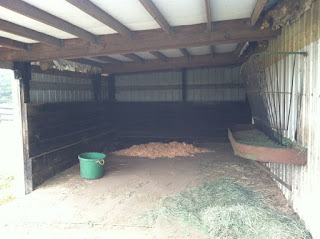 Bob doesn't care for stall life.  He will spend his winter sitting out all but the most dangerous storms in our large and spacious loafing sheds off our pastures.  Bob also doesn't like getting wet so I've put down some shavings, giving him a dry place to lie down.  As you can see Bob does like to throw his hay around.  :) 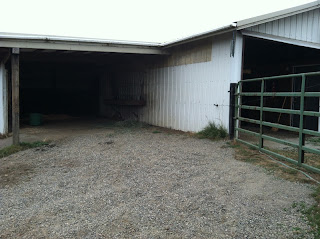 Gravel is like gold.  We've spread thick gravel next to the loafing sheds so that Bob (and hopefully another horse in our near future) have a place to stand off the (soon to be) muddy pastures. 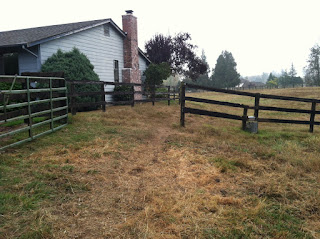 Today I spread gravel around the gates, where it also gets muddy and can be slippery. 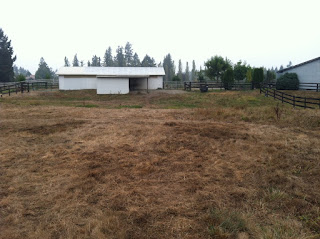 Due to the dry weather Bob has spent his nights in our middle pasture, using the loafing shed pictured above.  At only an acre in size I knew if I needed to get to him in the middle of the night due to an emergency (as in wild fire), I could reach him quickly. 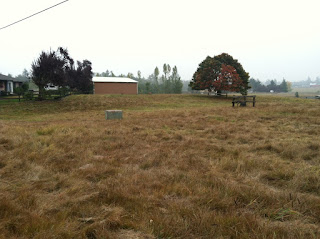 But during daylight hours I've opened the gate and let him wander out into our 3 acre summer pasture. 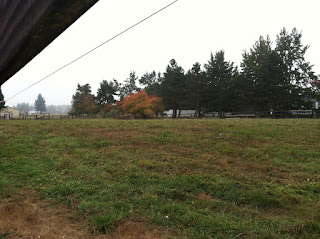 Around December we'll be closing the summer pasture and let it rest until next year.  Bob (and hopefully a new buddy) will move over to the winter pasture which has sat unused since last April. 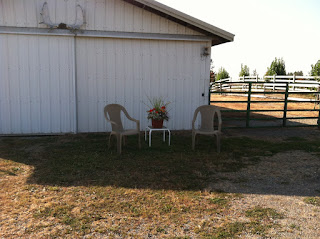 Our place is known for high winds.  With 'gusty' winds and heavy rains predicted this weekend it's time to get ready for the change of seasons.  I will sure miss sitting outside the barn while I wait for the water trough fill up each evening. 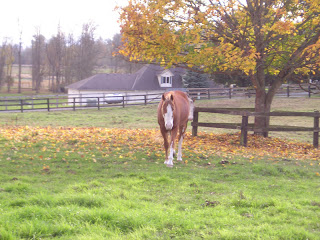 The furniture is put away, the flower pots are now on their own and will soon be emptied (Alvin is going to need to relocate).  The hanging basket which could launch into a window during high winds has been removed. 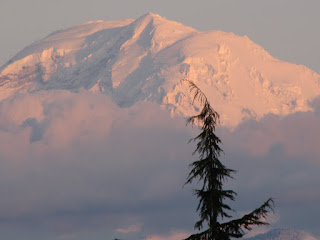 Today is Summer's End.  In the next 24 hours as the rains pound and the wind roars I will encounter that winter feeling of having everything tucked in and knowing we, our place and Bob are safe and sound.  And that's a good feeling.