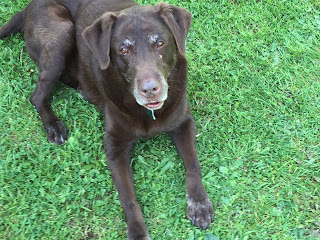 You will find a change to the "Cast of Characters" noted on the right side of my Blog for Hank is no longer there.

It's been 25 days since we said goodbye to Hank and even as I write this, I get a lump in my throat and my eyes fill with tears.

Saying goodbye is always hard.  But J and I have both found that even after this period of time the pain of saying goodbye to Hank still lingers.

We've had many discussions about why the pain is still so raw and recognized that with our former dog Tucker, his body was still functional but his mind was failing.  Because he wasn't clearly cognizant of his surroundings saying goodbye to Tucker - although still painful, didn't produce the long-term pain of losing Hank.

Hank's mind was clear as a bell.  It was his body that had failed him.  Because he was cognizant of his surroundings it's been much harder to deal with his loss. 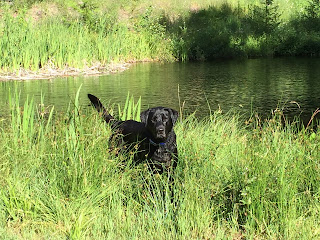 Bringing Ranger into the family prior to losing Hank was a good thing.  It was interesting to watch Hank show Ranger around the farm; i.e., we don't potty in the yard, we go out in the fields, etc. 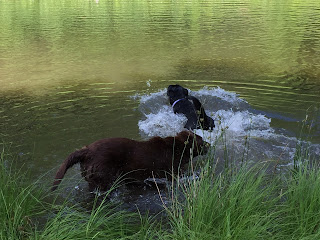 But it was Hank's last trip to the cabin in July that gave us the biggest chuckle.  As soon as I opened the hatch to the back of my car the two dogs had jumped out and with Hank in the lead, they headed down to the huge pond near our cabin - the pond, Hank's very favorite place at the cabin.

Both dogs had returned soaking wet with big smiles on their faces.  Throughout the next six days the dogs would frequently go to the pond, initially both Hank and Ranger.

Yet as the days passed Hank's body became frail.  He would quietly lay in the front yard in the warm sun waiting for his pal Ranger to return from his swim.

Although we monitored Hank's activity at the cabin, those six days took their toll.  And yet as I reflect on his last days, there is no better way to leave us than that wonderful last trip to the cabin.

In these last twenty five days Ranger and I have returned to the cabin twice.  On our first trip Ranger had gotten out of the car and run to the exterior front porch door of the cabin, frantically pawing at the door.

...Ranger was looking for his friend Hank.

And I think he found him.

For Hank is in the cabin.

He's down at the pond.

He's out in our fields sniffing and wandering around.

And Hank is forever in all of our hearts. 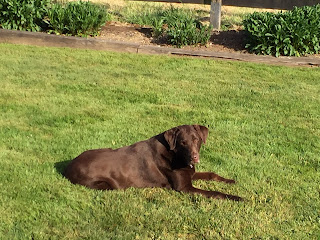