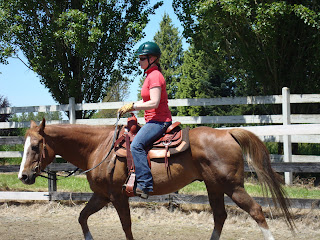 When I bought Bob last summer he was a willing horse.  He moved out easily.  But I noticed a growing trend.  Bob started to become sour.

Initially it started with sorting.  After the second or third run Bob would balk and try to refuse returning into the pen for additional runs.  My Frainer (Friend and Trainer) encouraged me to push him through it, thinking he was being lazy after standing idle along the wall with all the other horses' in-between runs.

But it worried me.  I asked my Frainer to check out Bob's saddle.  I had purchased the saddle for Poco and wanted to make sure it fit Bob correctly.  It seemed ok to me but I needed a second set of eyes.  She had checked it out told me that everything seemed fine.

As I've started to ride more often this late winter/early spring, I've noticed that Bob is once again becoming sour.  Initially I thought it was due to returning to work after a few months off.  But my last lesson brought it all to a head.

I'd hauled up to ride on Tuesday and had a great ride.  Returning for my lesson on Wednesday, I'd gotten on Bob and felt an immediate change.

If you've ever ridden a horse that's wound up tight as a spring, you'll understand what I felt when I'd gotten on Bob.  He was tight, real tight.  He walked out but trotting was not an option.  He balked each time I asked him to trot and I felt him get tighter.  The more I asked, the worse he got.  Suffice it to say I did ok until he started to shake his head and hump his back.  And with that...my confidence started to drop.  This was not my Bob...

I had told my Frainer, "I think something is wrong".  She admitted that Bob did seem to have an attitude that day.  But she told me that if I intended to sort this year that I'd need to learn to deal with these type of situations.

I tried to "deal with it" but it wasn't getting any better.  I kept repeating my concern.  My Frainer would hear none of it.  We battered around the "no there isn't/yes there is" for awhile.  It was a frustrating time for both of us.  She apparently thought it was all in my mind and I was frustrated that she didn't believe me.

It seemed we spent most of the lesson arguing the point.  As the next lesson started I got off of Bob and we walked out of the arena and back to the trailer in silence.

For the first time in five years I didn't say goodbye.  I was upset that I wasn't being listened to, upset that I hadn't stood up for myself (and for Bob) and terminated the lesson when I suspected something was wrong, upset that I'd kept on riding.

Something was wrong and until I found out what it was I would stay off Bob.
Posted by 50+ Horses at 11:19 PM