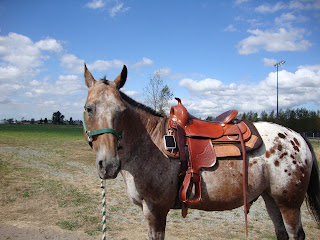 The saddle I use had been Poco's before it was Bob's. I had been unsure about sharing one saddle with both horses and had gone into Mike's Western Supplier's in Enumclaw, WA, to discuss my concern.

Mike runs his saddle shop on one side of the store.  Mike will actually take the time to fit your horse to the right saddle.  He knows his stuff.  His wife Cindy entices one with apparel (and awesome bling) on the other side of the store.  And just like Mike knows his saddles, Cindy knows boots and how your jeans should fit.  It's a joy to spend time in their store, where one is always treated like an old friend.

I hadn't hauled Bob up to Mike's.  Thinking the saddle seemed to fit fine, I thought I only needed verbal validation from Mike that all was well.  To Mike's credit he told me that he couldn't tell me if all was well without directly checking Bob and the saddle out, but from what I'd explained it seemed to be fine.

Ugh.  I had heard what I wanted to hear!

As our rides progressed, especially after my last lesson, I knew it was time to load Bob up and take him to Mike's so he could be evaluated. 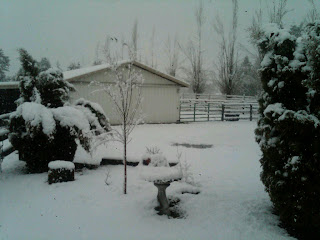 We've had these continuous winter storm cells which have left inches of snow or hail on the ground.  I needed clear roads to haul Bob and dry weather in order to do a saddle fitting, which takes place outside.

Last week I hooked up the trailer and truck so I could haul out in a moment's notice.  For DAYS I waited for the right time, in-between storm cells, when the roads were clear, to get Bob up to Mike's.  Last Friday brought us a few hours of sunshine and off Bob and I went.

I had saddled Bob up and walked him around for about 20 minutes before we hauled up so that Mike could see how the saddle fit.  Mike was able to make a quick assessment.

Something was wrong and it was Bob's saddle.

The saddle was wide for Bob in the front.  Mike showed me how it had slipped down on Bob's shoulders the longer it sat on him and that had caused him pain.  Yet, Mike confirmed the saddle fit Bob perfect everywhere else.  Bob needed extra padding so that it wouldn't pinch his front.

For less than $20 I walked out of Mike's with a solution.  Mike did warn me.  He told me to ride Bob for a few weeks and see if there was any discomfort.  He also told me to watch the cinch.  It should remain straight after my ride and not become crooked.  It may be I need additional padding.  If so, Mike urged me to not hesitate to return for a different pad (and you can bet I won't).

Of course, I couldn't leave Mike's without buying something.  I bought a back cinch which matches my saddle. I needed one - now I've got one. 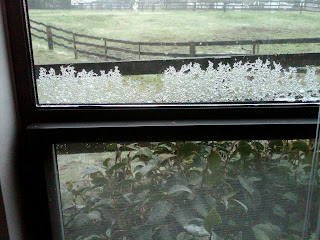 To date the storm cells keep coming and I can't get out and ride.  But I'm on track and know that if this doesn't resolve the issue that I'll be going back to Mike's for a thicker pad...Plus that breast collar and headstall that match my saddle are calling out to me...and then there are those cool boots and (many) purses on Cindy's side...  :)  But one more note...

Bob - my wonderful horse!  We have become so close.  Hauling him up and initially parking on the side of a busy two-lane highway, unloading him without any other horses around in a new environment, etc.

Bob was incredible during this whole experience.  Calm, cool, agreeable and so tuned to me.  I think he actually enjoyed the attention of the fitting and the trip!  I was so proud of him!
Posted by 50+ Horses at 11:14 PM