﻿
With my shoer due in a few hours, I looked out this morning to see Bob eating hay in his loafing shed off of the barn.  Since he usually spends most of his day away from the barn up at the other end of the field, I figured that I'd catch him close to the barn now and save myself the extra (muddy) walk later.

Out I went recently showered and wearing clean clothes.  When I went into the loafing shed with Bob's halter, he allowed me to come close but then spun away and galloped across the muddy field up to the far end.

I wasn't pleased, but I also wasn't surprised.  Bob has never been a hard horse to catch but ever since we lost Poco he's been unsettled.  And with the holidays and then the weather, I've been more of a hands-off owner than a hands-on one.  In the last month I'd noted that each time I try to approach Bob in the loafing shed during feeding time he has backed away.  Recently he has started to run away.  And I've let him get away with it.

Today it caught up with me.

Off I plodded through the mud and water to where Bob stood watching me.  I'd be darned, clean clothes or not, if I was going to let this go any further.  It was time to fix it.

I was able to slip the lead rope over Bob's neck but his twitching body told me that I was lucky to get that far.  As I slipped the halter over his nose and went to buckle it behind his ears, he started to pull away.  I replied with, "No, you don't."  And with that the halter was secure.

But I had a nervous, unfocused horse on my hands.  Head high, Bob was looking anywhere and everywhere for something to spook at.  The last thing I wanted was for him to jerk away from me as we walked back to the barn, knowing I'd surely slip in the mud and probably fall down.

So with freezing, soaking feet I decided to go through some groundwork steps and set the tone before we moved on.  It took awhile but eventually he settled down and focused on me instead of anything and everything around me.  I could tell by his slobbering sigh (which I adore) and body language that we were in a better "place".

As we walked back to the barn I kicked myself for allowing things to get to this level.  I knew I had to address this behavior before it got worse.  I made the decision right then and there to commit to bringing Bob back to me as the partner I knew last summer.  I knew if this behavior went further it would impact my future rides and life with Bob.

This must be fixed.

Securing Bob to the hitching post, I moved Gus into Bob's middle pasture where he will now eat out of Bob's loafing shed.  Closing the gate to the back pasture, I secured Bob's new home, the riding area (that is outside my office window) with access to the back loafing shed (that Gus was previously using). 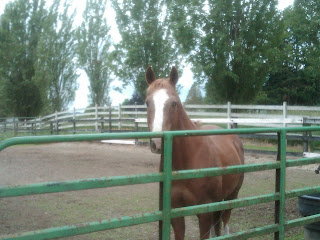 Turning Bob out in the riding area with his new shoes, he seemed content to be in a more contained area.  I spent the next hour along his fence line, picking up tree limbs (I seem to spend a lot of time these days doing that).  Bob hung around with me, not the same horse that ran away a few hours earlier...but still a horse that needs my hand on him more than I've recently allowed.